… which I’ve been over the last few days, in the project of setting up a new blog, in which I intend to Expose and Examine a collection of old postcards from the Era of the first three decades of the 20th century, and at the same time Explore a part of my own family history, by Extracting ‘Evidence’ from the cards. I’m feeling quite Excited about this, Even if I Expect it to be a rather slow process. But at least the postcard collection Enables me to set a sort of frame for the project.

In the meantime, I’m also getting back to my physical Exercises in the rehab pool since Monday. Hopefully, that will bring me back some Energy rather than just Exhaust me!

A button at the top of the sidebar will take you to the new blog.
Or just click here:

Greetings from the Past 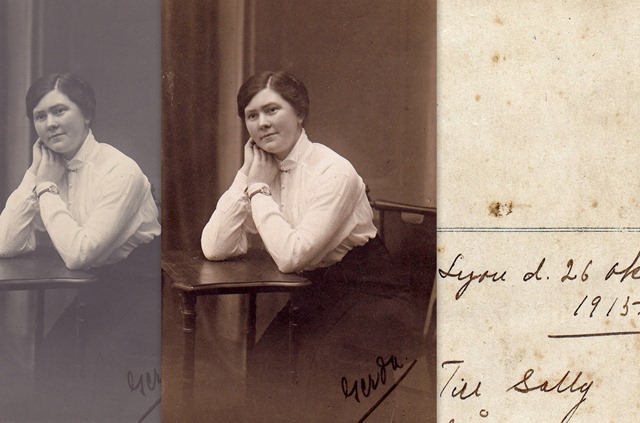 This is a photo of my grandmother’s travelling and card writing half-sister Gerda. The original photo as scanned to the left. With some improvements made by me in the middle (using Picasa). This photo was not in the postcard album; but when I turned it over I found that it was obviously originally printed on a postcard, and then cut to fit into a smaller photo frame. Luckily, the cutting has left the date – Lyon 26 October 1915 – and the dedication to my grandmother Sally, who would then have been 15 going on 16. Gerda was born 1881, so would be 34 in this photo. I can see the family resemblance between her and Sally in her features.

Posted by DawnTreader at 13:58