This week’s Booking Through Thursday question comes from Bookish Sarah (as usual via Deb):

If someone asked you for a book recommendation, what is the FIRST book you’d think to recommend (without extra thought)?

I didn’t have time to write this post until today, but the first book that came to mind when I read the question was the one I’m currently reading, even though I have not yet finished it: The Time Traveler’s Wife by Audrey Niffenegger (2003).

I’m listening to it as audio book in Swedish, borrowed from the library. What made me add it to my to-read-list in the first place was repeated references to it in various BTT answers. I guess my recommendation would depend a bit on who’s asking; but disregarding  that aspect, I’ll just give some of my own reasons why I’m finding it worth reading.

Henry has a genetic disorder which makes him travel in time. In his adult life he is a librarian. His wife Clare, eight years younger, is an artist. When Henry first meets Clare he is 28, she is 20. However, Clare first met Henry when she was six, and Henry in his thirties. The time confusion is mind-boggling; usually, each time Henry appears in Clare’s life until they meet in the their mutual now and get married, the age difference between them varies. For Clare, Henry has “always” been popping in and out of her life; while Henry does not get to meet Clare in her childhood until he is already married to her as an adult.

Henry also timetravels to other places and contexts and sometimes co-exists with himself at another age. His time travelling is involontary, and when it occurs, he can’t bring anything with him, so always lands naked with nothing, and often ends up in quite impossible situations, having to try to explain things to people who don’t believe him. Along the way a few more people than Clare come to know about his condition though, including a physician who is into genetic research.

Although the time-travelling frame of the story suggests science fiction, the focus is really on relationships, and especially between Henry and Clare. I would say it is not just a love-story either though, but also a story of how to live with whatever life or fate throws at us. It is about being utterly vulnerable and learning to live with that vulnerability, whatever the cause of it. It is about clinging to hope and giving in to reality all in one. On the one hand Now is all we’ve got; and on the other, we carry all our “nows” within us, whatever age we are.

So it is about dealing with memories, and the Now, and knowledge, and a future which holds both things we know nothing about, and things that we may know something about even if still not every detail (like when living with a serious disease). It’s about trust and fear; truth and lies; life and death; reality vs dreams; and wanting to but not always being able to protect either ourselves or those we love. It’s about a whole lot of things like that; and that’s why I’d recommend it.

Happy Easter to you all! 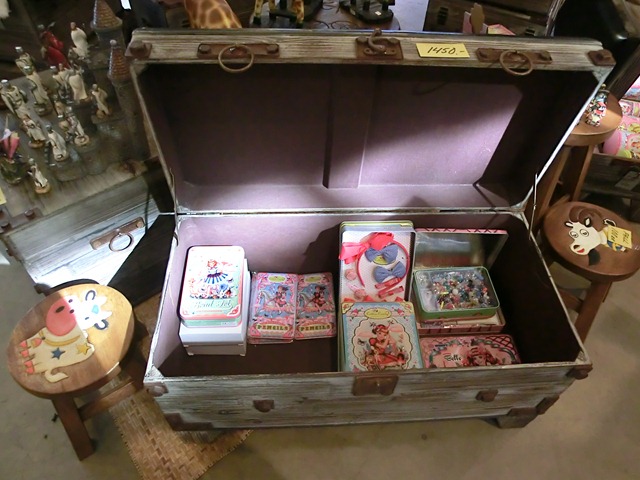 A book-treasure chest displayed  at the Home & Garden Fair I visited a couple of weeks ago. I loved the way the light hit it.

Posted by DawnTreader at 18:05