Still recuperating from my bronchitis och cough, and not having a lot of new exciting experiences to blog about, over the last few days I’ve had another go at getting on with blogging about the collection of old postcards I found among the inherited family papers and photos back in February. I’ve mentioned this before, but I’ll seize the opportunity once again to draw your attention to the special blog I created for the purpose: Greetings from the Past. There is a button leading to it at the top of the sidebar in this blog; and below the button also a “newsflash” showing the very latest of my old news. I have just recently been putting in a whole row of new posts though, if anyone wants to catch up.

So far the postcards in my great-uncle Gustaf’s album have turned out to be organized pretty much in the order that they were received around 110 years ago. Basically I’m studying them one by one, trying to collect whatever clues to family history I can find in the short messages. But I also keep learning all sorts of odd facts from the picture postcards themselves.

One of the things that keep hitting me is that at first glance, I tend to think of things I see in the old cards as “an old church” or “an old house”; but when I look up facts in Wikipedia or Google, more often than not I find that when the postcard was sent, that building was brand new.

These ancestors of mine at the beginning of the 20th century were living in a rapidly changing and expanding world. They were using postcards to communicate almost as we today use emails and text messages. Mail was sorted aboard the trains and delivery was fast. (I know back in my childhood in the late 1950’s we got mail deliveries twice a day.)

Some people weren’t content to just stay home and wait for old news either.  I already know that a few pages further along in the postcard collection, I will find both my great-uncle Gustaf and his sister Gerda in North America, across the Atlantic Ocean. 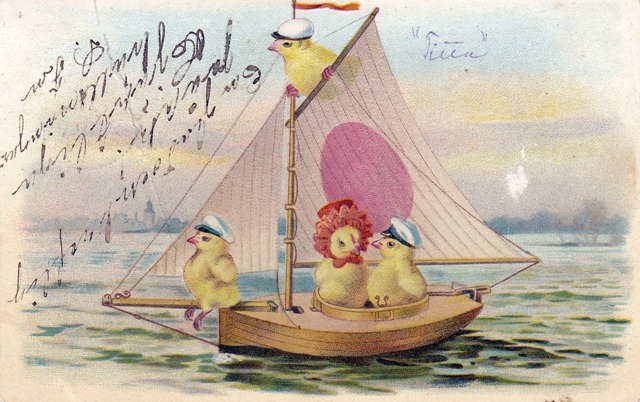 An Easter Card sent to my great-aunt Gerda in 1902, while she was still in Sweden. At Easter 1903, she had crossed the Atlantic Ocean and was living in Chicago.

Gustaf and Gerda were two of my great-grandfather Samuel’s children from his first marriage, born in 1878 and 1881. My grandmother was their half-sister, born in February 1900 to Samuel’s second wife. When these two older half-siblings went off to seek their fortune in America, my grandmother Sally was not yet three years old.

Posted by DawnTreader at 14:20