When visiting my health care centre on Monday because of bronchitis and asthma trouble, as part of the examination I was introduced to a Nebulizer .(Swedish: Nebulisator) It was new to me, so afterwards I looked it up to learn its name and a bit more about it. 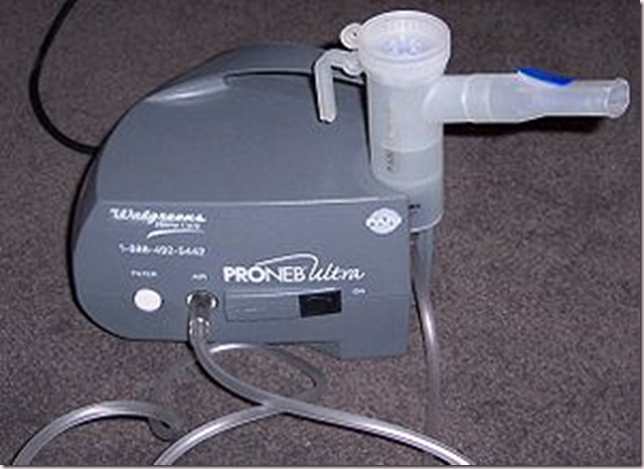 Nebulizers are used for the treatment of asthma and other respiratory diseases.

Nebulizers use oxygen, compressed air or ultrasonic power to break up medical solutions and suspensions into small aerosol droplets that can be directly inhaled from the mouthpiece of the device. The definition of an aerosol is a "mixture of gas and liquid particles," and the best example of a naturally-occurring aerosol is mist, formed when small vaporized water particles mixed with hot ambient air are cooled down and condense into a fine cloud of visible airborne water droplets.

The first "powered" or pressurized inhaler was invented in France in 1858. This device used pressure to atomize the liquid medication. The pump handle was operated like a bicycle pump.

In 1864, the first steam-driven nebulizer was invented in Germany. The Siegle steam spray inhaler consisted of a spirit burner, which boiled water in the reservoir into steam that could then flow across the top and into a tube suspended in the pharmaceutical solution. The passage of steam drew the medicine into the vapor, and the patient inhaled this vapor through a mouthpiece made of glass.

The first electrical nebulizer was invented in the 1930s, but many people in the 1930s continued to use a much more simple and cheap hand-driven one.

Exactly what kind of electrical nebulizer  it was that I used now, I don’t know. The picture is from the Wikipedia article. The one I used looked similar but not the exact same shape.

Anyway (for those of you who did not read my previous posts this week) it was a test treatment to see how well I responded to cortisone. Afterwards I was prescribed a short cortisone tablet cure to help me through the present problems (my regular everyday treatment with dry powder inhalers having proved not quite sufficient in connection with a bad cold last week)

Sorry if I seem a little obsessed by my own respiration and not much else just now… But breathing is rather essential for the rest of life, you know! ;)

Posted by DawnTreader at 21:22