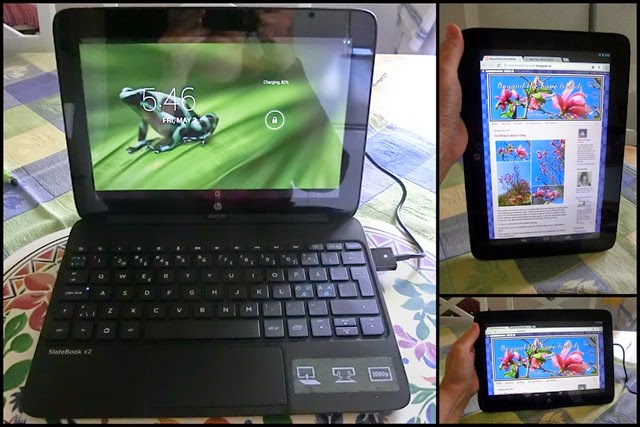 I’ve been thinking about it for quite some time – getting a tablet. But I’ve not been able to make up my mind what exactly it was I wanted; and the development in computer technology seems always to be moving on so fast that it’s really hard to keep up, and decide what to buy (and when).

As I said in my previous post, yesterday seemed to me like a day when I got nothing done. However, I did spend part of that day looking up and comparing data about a number of Android tablets… Not too make it a totally impossible mission, I limited my search to those just now available in a store close to where I live. But at the end of the day I still had not reached a decision.

The thing is, I started out looking for a simple tablet. But then I came across the HP SlateBook, with a touch screen (10”) that can be used either independently as a tablet, or docked into a keyboard. And it was “deal of the week” at about 30% off, which put it in the same price class as the (not too advanced) tablets without keyboards that I’d been looking at… and with a somewhat better screen resolution on top… Hmmm…

I found a demo video on YouTube. The presentation as such would not win any awards

but it does show the essential functions of the device. (Including that it seems able to survive being dropped on its head!)

I was still feeling hesitant last night; but when I woke up I found that I had made my decision, and that the SlateBook (somewhat to my own surprise) was what I wanted. So I went out and bought it.

You don’t need three guesses to be able to tell how I spent the rest of the day.

So far I’m not disappointed. I did also watch another review on YouTube which was a bit more sceptical and uttered the opinion that this device does not even know itself what it wants to be; but I think perhaps that might be just what makes it perfect for me… (not knowing exactly what I wanted anyway!)

Actually, of course, I did have a few things in mind:

1. I wanted something “in between” my laptop and my Android phone. And that’s just about what this is.

2. I wanted a screen large enough for reading blogs and emails and other websites, as well as watching TV, in bed. Using my laptop for that purpose is a bit circumstantial (if that’s the word), primarily because it has less than two hours battery time, plus is also connected to some other devices in the study (like printer and extra screen etc); so it involves a lot of disconnecting and reconnecting of cords every time I want to move it. Better if I can just remain in the study, serving as a desktop.

The new HP promises up to 14 hours of battery time.

3. My phone has not been very willing to let me comment on blogs (or else too willing - I gave up trying after once managing to leave eleven identical comments on one friend’s blog). And of course on the phone, pictures get very small too.

On the SlateBook I can access my own blogs via Google Chrome, and also comment on others; just as on a regular computer. (I’ll still be using the laptop for making new posts. But being able to do comments from the small one will no doubt be helpful.)

4. Various other communication apps and word games etc should be easier to handle on a bigger screen than the phone as well. And I don’t have to worry about running out of memory space for a while on the new one (the phone memory is getting rather full which sometimes causes trouble with updating apps now).

5. My laptop did not seem to get on with Skype when I tried to install that last year. (I ended up uninstalling it again.) I’m hoping that with the new device I might be able to finally have a skype chat now and then with a friend who moved to Australia. (The HP also has two cameras, both front and back.)

6. I’ve also successfully downloaded the Kindle app to the SlateBook, and should be able to use that for reading/ looking at books with illustrations in colour.

That’s about as far as I got with my “testing” sessions today – but so far I’m pleased!

Now I think I’ll go watch some TV in bed!

Posted by DawnTreader at 22:07