On the Importance of Water

On Friday morning I woke up knowing that from 10 am we were going to be without water in my building for six hours. I knew this because they put up a notice about it on the entrance door downstairs on Thursday afternoon. Much too short notice in my opinion, as everyone does not go in and out of their apartment even once every day. And this time I would have missed it if I hadn’t happened (by chance) to go out twice! Ah well… (I’ll save the rest of my growling for the next tenants’ questionnaire.)

What I had not had any notice of at all was that I would also on the same Friday morning be waking up to no internet. That’s probably because no one knew about that, though. (It had nothing to do with the water. It just added further to making it a weird kind of day.)

Anyway, faced with these two facts, I had to come up with some kind of strategy for the day. As I did know about the water, I had been able to fill some bottles and buckets; but I still did not feel like spending the whole afternoon at home without a working W.C. (Oh dear, how much we depend in our urban life on our modern facilities…) As I did have electricity, I decided to have an early lunch at home though (heating up some soup from the freezer); but after that go out for the afternoon.

As there was also beautiful autumn weather going on outdoors, I can’t claim it was really all that much of a hardship, this time. 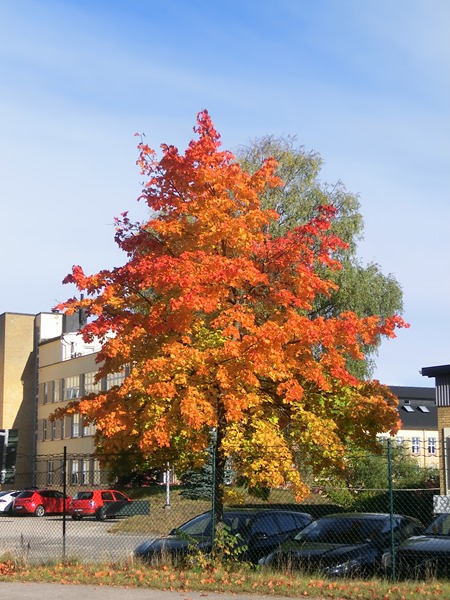 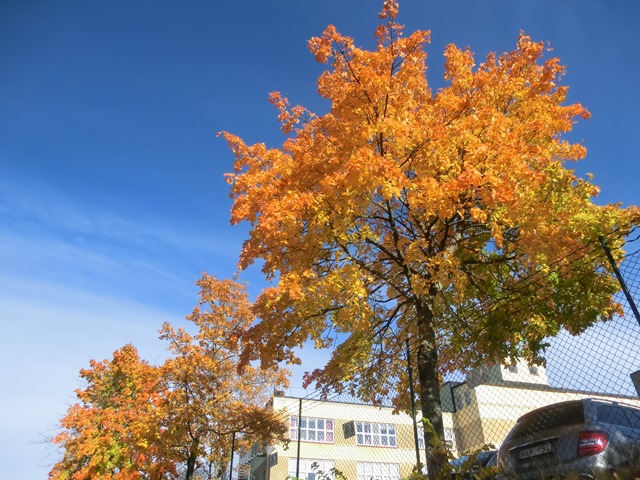 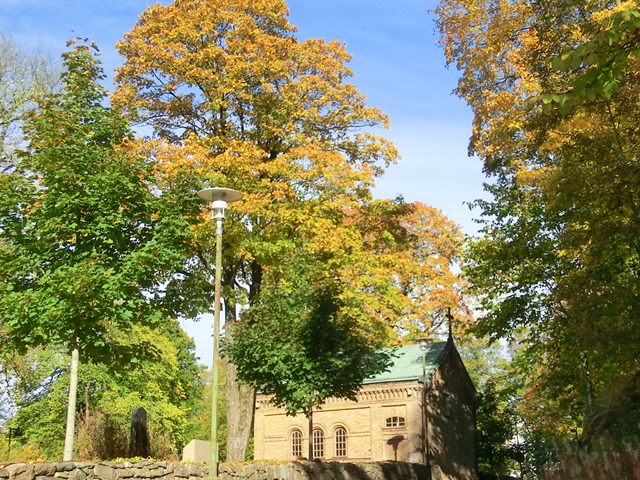 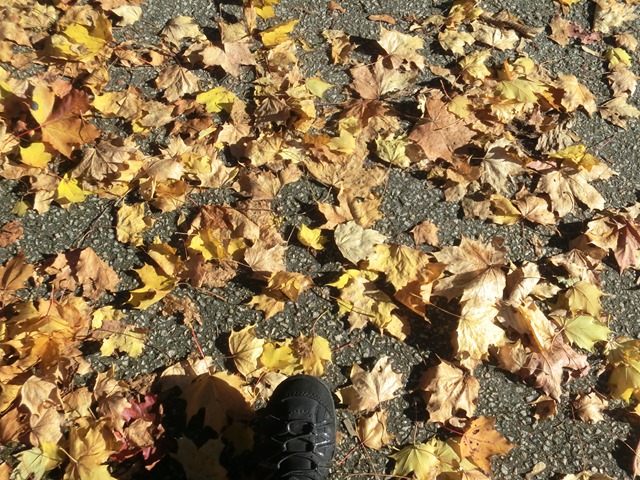 In town, I found a certain lack of water even in the river, though! 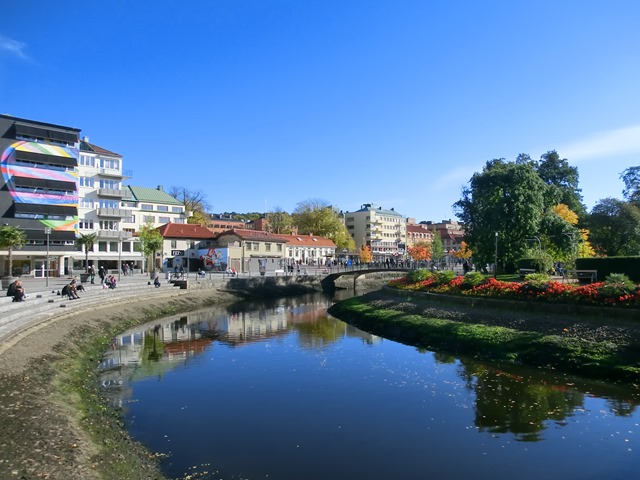 (Not sure why this was; but later the same day I also heard on the news that water levels were low at the moment in lakes and rivers in the whole country, because we’ve had very little rain so far this autumn. So where the water level can be regulated, they still have to keep it low, to do with the fresh water supply in other areas.)

I continued uphill to the Art Museum; and found that this seemed to be where the water was. Even some fish had taken refuge there! 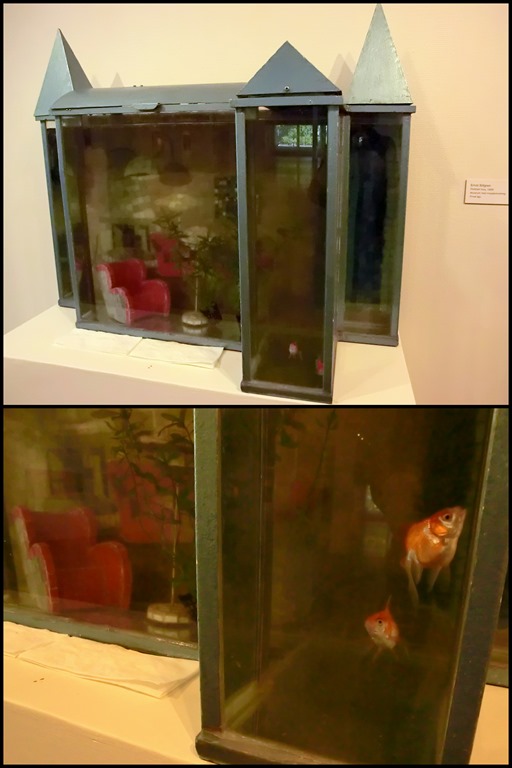 This unusual fish-tank (with mosaic furniture, and live fish) was created by the Swedish artist Ernst Billgren, quite well known in Sweden since a couple of decades back. About a year ago he changed his name though, to Wilhelm von Kröckert. And in the exhibition currently shown at our art museum he is co-exhibiting with himself, so to speak (i.e. under both names).

His name-change is not as far-fetched as it might seem; even if he probably partly also did it for artistic purposes, to explore things to do with identity. But Wilhelm used to be his middle name, and Kröckert was his mother’s family name, and even his own surname in early childhood; until his mum married his step-dad and they took his last name (Billgren).

I have been to see one exhibition by Billgren before, back in 2000 (at the art museum in another town, Jönköping). From that one I remember large dystopian paintings of animals and nature taking over houses abandoned by humans (compare the fish-tank!), and also big mosaic animal sculptures. There were some works of that kind in this exhibition as well: 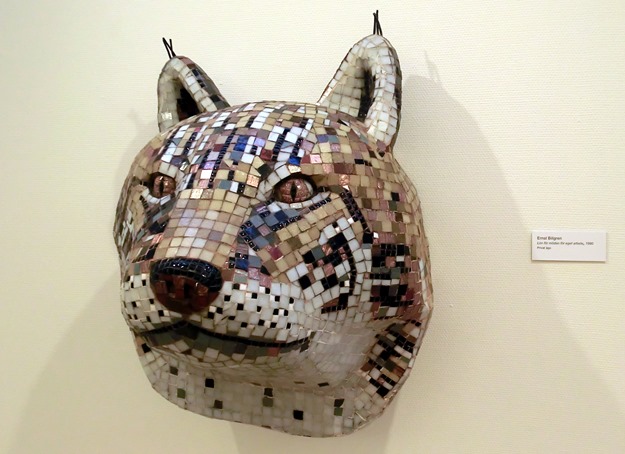 One thing that impresses me about Billgren is his undeniable skill to work in different techniques. He has also made some unique pieces of wooden furniture; and I suspect he also probably (at least sometimes) makes his own frames for his paintings. 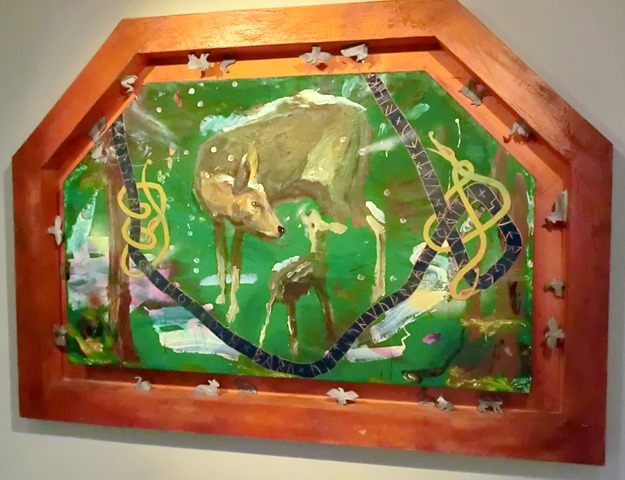 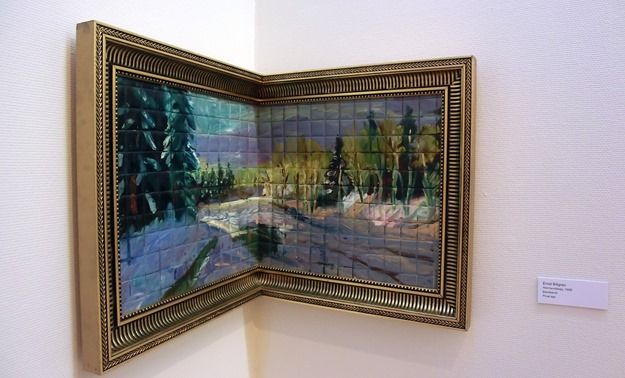 His later paintings, under the name of von Kröckert, are dystopian as well, but in a sort of updated science fiction/fantasy-like style. For one thing, in the later paintings there seems to me to be a shift from the theme of animals/nature taking over human abodes, to humanity’s own constructions (like buildings) sort of coming alive and taking over it all. I also find that the later works give a sort of detailed “HD” impression compared to many of his earlier ones. I didn’t catch any really good example of the later ones with my camera, though. (Even if I could see no signs forbidding photos, I felt a bit weird about taking too many.) But you can easily do an image search on the internet and find lots of examples in just a click. These next three images below are not my photos (but borrowed from the almighty web); but I did see the original paintings in the exhibition:

Finally, I also have to share one painting which took me very much by surprise. It’s one of three that he painted “from other people’s memories”. He asked three different people to share a memory, and then painted his interpretations of each of their stories. One  relative, one friend, and one stranger. The stranger wasn’t me, but could just as well have been! 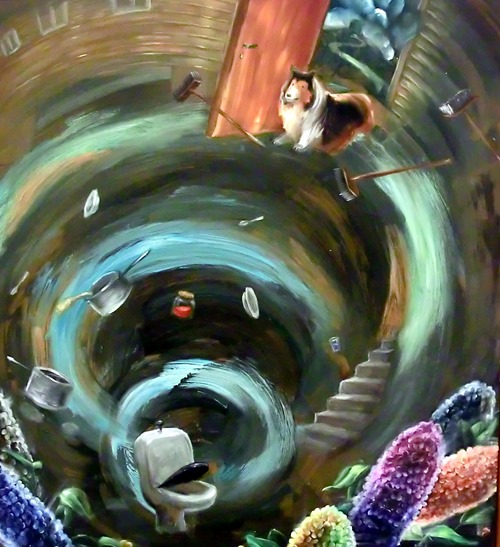 Because I too have childhood memories from my grandma’s house, of having to go down dark narrow steps to the cellar to use the toilet down there – the only one in the house back then. (The alternative, in summer, was the outhouse – which was strange as well.) What makes this painting extra spooky for me, though, is that dog! Because my grandma had a collie just like that as well! And lilacs in the garden. And the stairwell and cellar also used as storage for brooms and pots and pans and jam and so on… 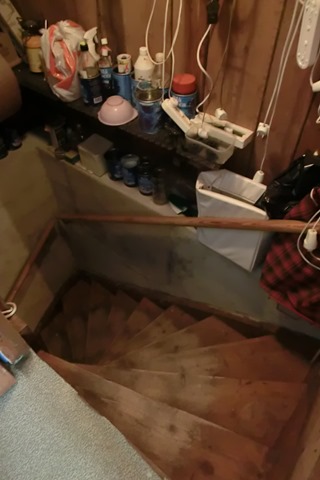 This is my photo looking down the stairs down to the cellar in the House, before we had it cleared out for the sale in 2014. Back in my childhood, in my grandparents’ day, I don’t think there was even a banister to hold on to. And downstairs in the cellar, there was a kind of pantry space you had to pass through as well, to get to the bare, unpainted bathroom (which was taken out long ago, so I have no pictures of that). 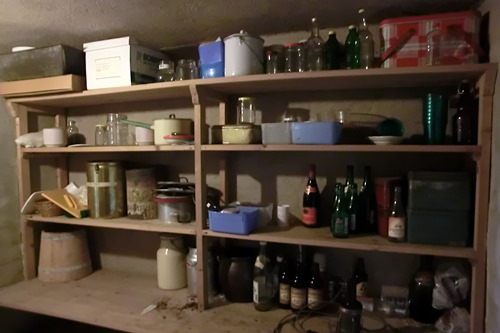 The W.C.s at the art museum were fully functioning, though…

And the exhibition interesting enough for me to spend about 1½ hours walking around there, before I set off home again…

And when I got back home to my flat, both the water and the internet was on again, reminding me of how lucky I am – compared to way too many people in the world who don’t even have a roof over their heads, or clean water to drink, because of either natural or political disasters (or both!)…

Sharing with:
Through My Lens & Our World Tuesday

Posted by DawnTreader at 19:24