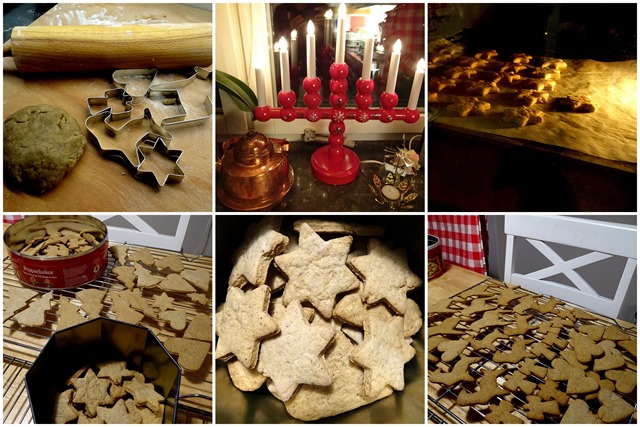 A Swedish Wiki article informs me that the history of gingerbread may go as far back as to around 1700 B.C. (!) in Mesopotamia – i.e. long before the first Christmas. The same article also says that Roman soldiers used to carry them as provision, because they kept well and did not get mouldy. In Sweden, ginger biscuits were probably “imported” from Germany back in the 1300s. (Swedish: pepparkakor / German: Pfefferkuchen,  because the original recipes had pepper in them.) Recipes began to spread here via cookery-books in the 1700s; and in the 1800s they came to be associated especially with Christmas.

During my lifetime, home made ginger biscuits have always been part of the Advent/Christmas traditions, both in my own family and with a lot of friends. I think I started baking my own the same year I moved into my first flat that had an oven. (The first year away from home I lived in a small student’s flat without a proper kitchen.) There were a number of years in between when neck/arm problems stopped me from baking; but a few years ago I decided to try it again, but now with smaller batches.

This year’s bake proved to be somewhat of a challenge - again - probably because I forgot to add the treacle when I made the dough… (It’s in the recipe and I did take the bottle down from the cupboard before I started, but…)  As a result, the dough got a bit too dry and crumbly, and the biscuits definitely not my best batch ever. I also had to take a long break to rest between my “workout” sessions at the baking board! But hey, the biscuits didn’t break, and less sugar = healthier, right??

Do you make gingerbread biscuits/cookies – and if so, what spices do you use? My mum’s were different from those made by her mother (who died when I was only six years old, but taste is a rather strong bearer of memories!). And mine in turn are a bit different from my mum’s. I recall my grandma’s gingerbread as having a stronger taste of ginger and being of a lighter colour than mum’s. Mum had ginger, cinnamon and clove in hers. I too have those three but also cardamom in mine.

I may have told the story before, but reading about the Roman soldiers above (keeping gingerbread as provision) reminds me: When clearing out my parents’ house, I found some left-over gingerbread biscuits in a jar in a kitchen cupboard. Not sure now how long after mum’s death this was, if in the same year or later (she died in May 2009 and we didn’t sell the house until 2014; but I probably went through the kitchen cupboards a few times in between.) Anyway, the biscuits were still hard and with a strong spicy smell, awaking memories of Christmases past... I didn’t eat them but took a few home with me and kept in a small tin jar. I never ate them, just opened the jar every now and then to smell them. I think I actually kept them for a another few years before finally throwing them away. But even then I suspect they would probably still have been okay to eat!