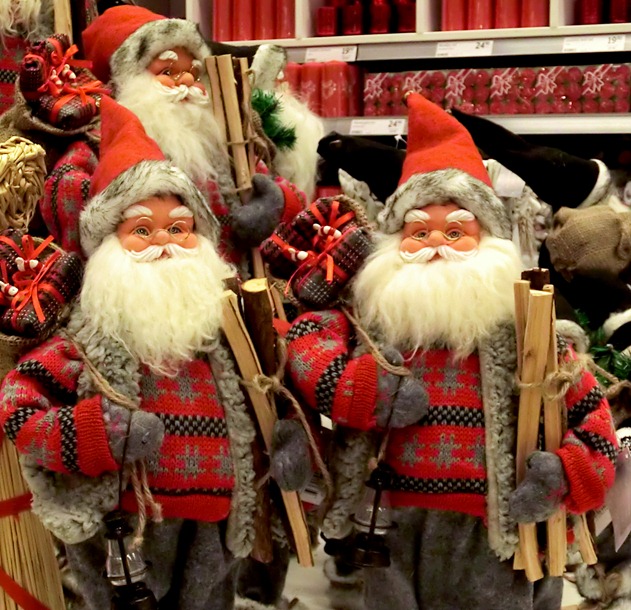 A bit early yet for Christmas, you think? Actually in the supermarkets and shopping malls it’s already been going on for a while. The photo above is from two weeks ago.

But the Christmas decorations are not the reason why I claim that Christmas Starts Here. No, my reasons for an early Christmas this year are more personal: This Monday was my last time in the rehab pool for this period; and I’m in for a three months “break” again.

These breaks keep falling at a different time each year, since each training period (for which I need my doctor’s referral) is six months; followed by three months break (= going back on the waiting list); and if July falls within the training period, that month does not count because then the pool is closed.

I’ve had the privilege of keeping up the training in the pool for ten years now. While I was floating around relaxing during my last 15 minutes there today I was trying to figure out (by counting backwards) when it was they introduced the system with the 3 months interruptions. I kept getting distracted though so I’m not sure I got it right. But I think it must have been 3-4 years ago.

Since it does not really help much to just mope about it, I keep trying to come up with ways to be positive instead. But since the ‘breaks’ keep moving, I have to think of different motivations each time. It’s been going something like this:

When the break falls in the autumn, that’s good, because a beautiful autumn day is really my favourite time for a walk, and that way I get exercise anyway. (Let’s not focus too much on the rainy days.) And then I get to go to pool all winter; which is good, because it gets me out of the house, and provides exercise even in cold weather.

When the break falls in the summer that’s good too, because then the weather is (presumably!) warm anyway.

When the break falls in the spring, that’s good because… Well, actually it’s really hard to come up with a positive attitude for the month of March either way, but it gets easier a bit further along…

Last winter I had my break from January through March, and since that was a rather horribly cold and snowy and icy time, it was honestly a relief not to have to go out on some days.

This time the break will be from NOW until mid February or so. So I’ve decided to just see it as the longest Christmas holiday ever. Since summer did not get to be much of a holiday (with my dad’s death in mid June), I really think I can use one.

Actually there is no end to the things I imagine myself to be able to get out of the “extra” two mornings (six hours) a week ahead. Mind you, I know it’s mostly in my imagination… In reality I know shall have to spend much of the time just finding other ways to compensate for the exercise and relaxation that the time in the pool (2x45 min) otherwise provides.

However – what I shall not miss is all the extra getting in and out of multiple layers of winter clothes; or the crowded locker room and shower room; or waiting for busses in cold weather; or walking those endless hospital corridors...

And what I shall enjoy is the knowledge that if I wake up in the morning and find a snow storm outside my window, I’ll just be able slip back into bed, without having to make phone calls to excuse myself to anyone. Actually, I may not even have to bother about setting my alarm clock at all for the next three months!

Now I think I’ve better stop before I start to imagine that I won’t have to go out at all; which of course I shall both have to (for food and such) and probably also want to (for photos and such).

Besides, so far we’re having an unusually mild and dry November, and not really too unpleasant to go out into at all. Most of the leaves may have fallen off the trees, but the lawns are still green.

Tonight, however, I’m celebrating ‘Christmas Eve’. The plan is to light candles, curl up, drink tea, eat chocolate, watch a film plus a favourite TV series, then read a good book in bed before sleep… Hm, I’m not even sure that leaves any more time for blogs today!