Idle Thoughts on a Foggy Day 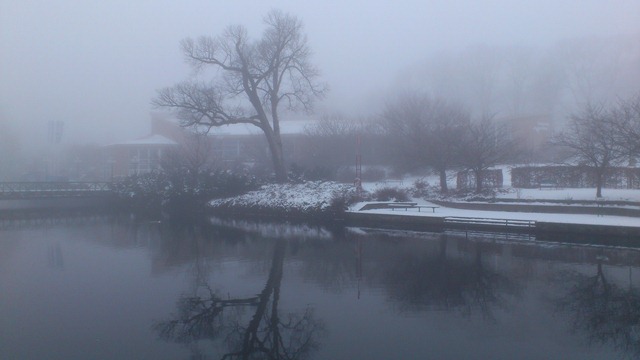 Which reminds me of  these quotes from Idle Thoughts of an Idle Fellow by Jerome K. Jerome (1886):

The weather is like the government—always in the wrong. In summer-time we say it is stifling; in winter that it is killing; in spring and autumn we find fault with it for being neither one thing nor the other and wish it would make up its mind. If it is fine we say the country is being ruined for want of rain; if it does rain we pray for fine weather. If December passes without snow, we indignantly demand to know what has become of our good old-fashioned winters, and talk as if we had been cheated out of something we had bought and paid for; and when it does snow, our language is a disgrace to a Christian nation. We shall never be content until each man makes his own weather and keeps it to himself. If that cannot be arranged, we would rather do without it altogether.

The weather, I suppose, has not changed all that much since 1886; but neither, it seems, have umbrellas:

I wanted an umbrella, and I went into a shop in the Strand and told them so, and they said: "Yes, sir. What sort of an umbrella would you like?" I said I should like one that would keep the rain off, and that would not allow itself to be left behind in a railway carriage. "Try an 'automaton,'" said the shopman. "What's an 'automaton'?" said I. "Oh, it's a beautiful arrangement," replied the man, with a touch of enthusiasm. "It opens and shuts itself." I bought one and found that he was quite correct. It did open and shut itself. I had no control over it whatever. When it began to rain, which it did that season every alternate five minutes, I used to try and get the machine to open, but it would not budge; and then I used to stand and struggle with the wretched thing, and shake it, and swear at it, while the rain poured down in torrents. Then the moment the rain ceased the absurd thing would go up suddenly with a jerk and would not come down again; and I had to walk about under a bright blue sky, with an umbrella over my head, wishing that it would come on to rain again, so that it might not seem that I was insane.

Posted by DawnTreader at 18:31