Inspired by Scriptor Senex’s Friday Rambles, I thought I’d share this piece of local “zooborn” news with you:

Orangutan baby Saga, born at Borås Zoo 14 January 2013, was presented to the world this week.
Photos from www.bt.se (above) and mynewsdesk.com (below)

The proud parents of the new baby are Sabine and Baku. They are Borneo orangutans; an endangered species. (There is also a Sumatran kind, even more endangered.)

Mummy Sabine is 26 years old and has been living at Borås Zoo since 1990. Little Saga is her fifth child and was born in the night without any human assistance.

Sabina had her first baby in 1996 – Sol. She got quite a lot of attention at her birth because she was the first orangutan born in Sweden. Sol now lives in the Vienna Zoo in Austria, and two brothers of hers have also gone off to live in other zoos. Saga’s sister Storma, born in November 2008, is still living “at home” though.

Daddy Baku came from London Zoo in 2000 and is the father of both Storma and Saga. 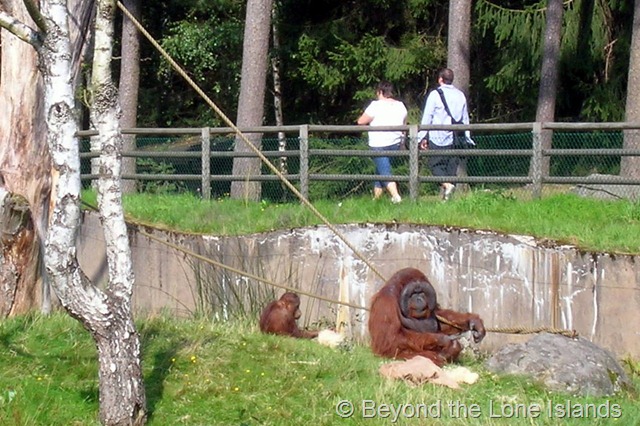 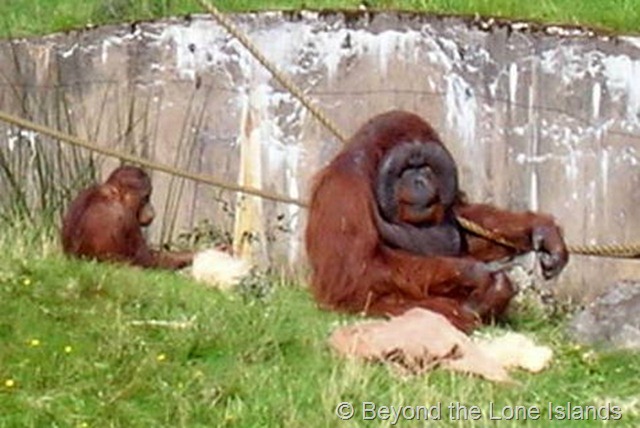 My own photos from summer 2009:
Above: Baku and son (I assume).
Below: Sabine and Storma. 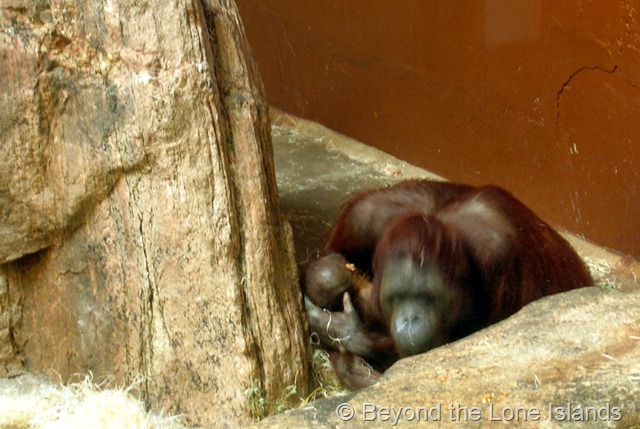 Not easy to find any privacy in a zoo! I remember feeling rather like an intruder, taking this photo… (Sorry, Sabine.)

Baku sometimes draws a piece of sackcloth over his head for a blanket and (presumably) to try and escape from people’s gazes. Orangutans are among the most intelligent primates; they use a variety of sophisticated tools and in the wild they construct elaborate sleeping nests each night from branches and foliage.

Once back in 2006 Baku managed somehow to escape from his cage and attacked a zookeeper (who survived but lost some of her toes and a finger). Normally the animal keepers are never in the same room with the orangutans so in this case there was some (technical?) mistake involved in connection with letting him in or out between cage/outdoor enclosure.

Baku lives together with Sabine and their kids though, which seems to work for them even though this is not quite natural behaviour in the wild. Orangutans are the most solitary of the great apes, with social bonds occurring primarily between mothers and their dependent offspring, who stay close together for the first two years. The mother will carry the infant during traveling, as well as feed it and sleep with it. For the first four months, the infant never relieves physical contact with the mother.

The Malay/Indonesian name Orang Hutan was originally not used to refer to apes, but to forest-dwelling humans.

Posted by DawnTreader at 17:33