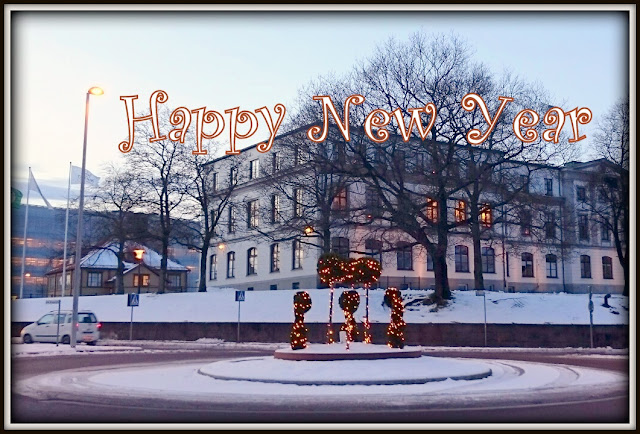 Christmas decorations in a roundabout I passed on my way back from town yesterday afternoon - photo taken with my phone. (The building in the background is a school.) As you can see, we still have some snow and ice on the ground... The temperature has stayed close to zero (freezing point) since the snowfall on Sunday. Thawing a little in the daytime, but colder at night.

As some of you know, I had the misfortune of breaking a tooth on Christmas Eve. No pain involved, though, so I survived the weekend without "serious" problems. Phoned my dentist on Monday morning, got an appointment for Tuesday afternoon, and he was able to fix it in one sitting; so that's behind me now. I hope it's not tempting fate (or the tooth fairy) to say that I'm hoping not to have to see the dentist again at least until next year!

New Year's Eve tomorrow I'll be spending as usual with a handful of friends in my own home - a tradition we've been keeping up for 16 years in a row now. (Three of us were neighbours living in the same building back when it began.)

Linking to Mersad's Through My Lens

Posted by DawnTreader at 22:25