Have you ever finished a book and loved it so much you went right back and started re-reading it again?

Oh yes I have (and those who have been following this blog for a while will already know that!) ... The first that come to mind is each of the Harry Potter books. Mind you, the first four of these I first made acquaintance with as audio books in Swedish; so it was immediate re-listening in Swedish first; and later reading them in English, and listening to the English audio versions (there are two: read by Jim Dale vs Stephen Fry). With the last three, I read them as books first as soon as they were published (in English), and then listened to the audio versions pretty much immediately afterwards. I have re-listened to the whole series several times over during the decade that has passed since I first listened to The Philosopher's Stone. This is because they are so full of amusing details, and also because the story develops from one book to another; so that one may be struck by different things each time, and the understanding of whole actually grows with rereading.


There are other books or series too that I have reread and relistened to several times over - The Chronicles of Narnia for one. But with those and a few other favourites that I first read a long time ago, I can no longer remember excactly how soon afterwards I made the first re-read. Then there are of course some books that I've started right over with for study purposes (like writing an essay).


Out of all the novels in my bookshelves, there is one that I have probably read more times than any other, and that is Three Men in a Boat by J.K. Jerome, first published in 1889. Although it was written more than 120 years ago, I find his observations and wit and humour timeless. My old Swedish paperback copy of it is from 1967, and I'm pretty sure I read it first time before our family's first trip to England/London in 1969 (ie when I was 13 going on 14). This because one of the most famous episodes in the book involes the maze at Hampton Court; which we visitied on that trip. 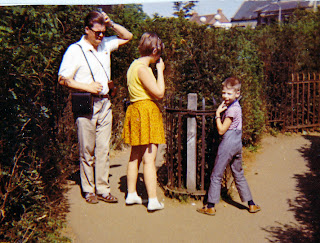 Anyway, I'm not sure how many times I've reread (or in later years listened to) that book since then, but I would not be surprised if it was at least once a year, which would make it about 40 reads (or more). And it still makes me laugh!
Posted by DawnTreader at 13:47