From my other blog, DawnTreader’s Picture Book, I take part in Friday My Town Shoot Out, with a different theme each week. This week’s theme is Grandparents’ Day. We do not have a special Grandparents’ day in Sweden, but I did (of course!) have grandparents… So I posted their wedding photos for FMTSO. But since I’m trying to sum up some family history anyway, I got inspired do an extended post here. It might be followed by more family history posts later as I continue to go through old albums and notes – we’ll see. 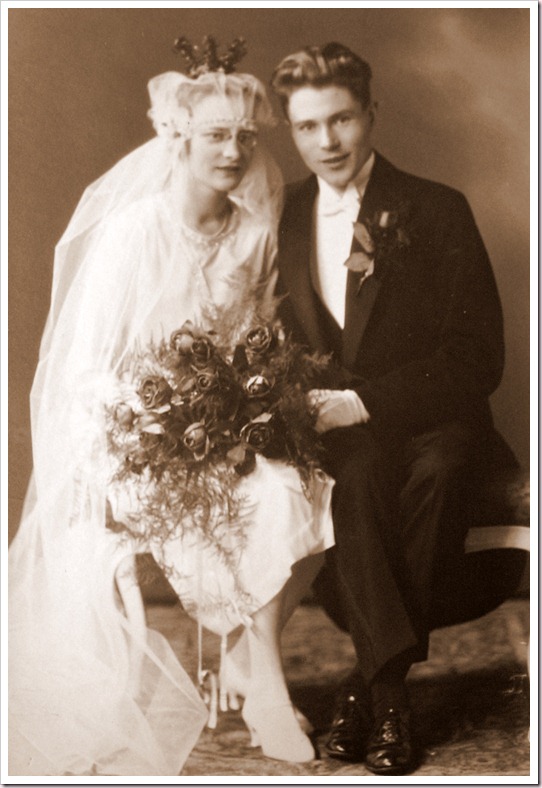 ▲ My maternal grandparents, Gunborg and Hugo, 1928. 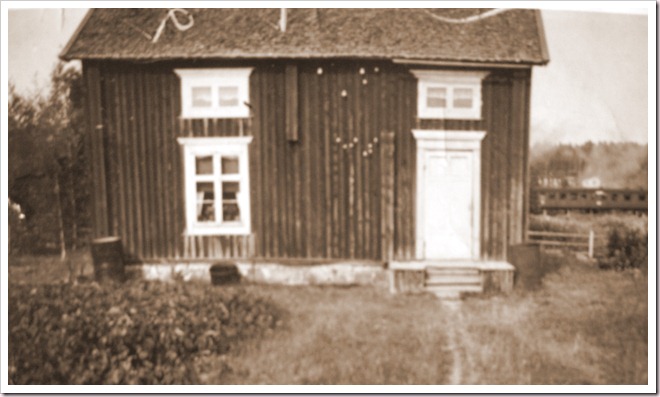 ▲ The cottage far up in the north of Sweden where my grandfather Hugo (born 1901) grew up, with his parents and four or five siblings. His father was a sawmill worker. Hugo too started out working at the sawmill, but also studied per correspondence, and went on to become a teacher, and later in life headmaster. 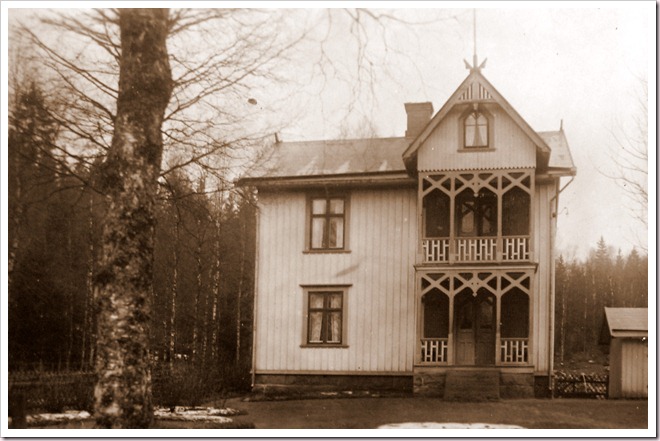 ▲ The house (here in Borås) where my grandmother Gunborg (born 1902) grew up. The house was demolished in the 1970s, but I remember it from my childhood, when two cousins of my grandmother’s still lived there. In Gunborg’s childhood, her family (with four children) shared the house with her aunt and uncle-in-law and their five children. All the children grew up like one family. Gunborg’s father was a clerk; and Gunborg herself before her marriage worked as a secretary.

Hugo and Gunborg actually got to know each other per correspondence – and in shorthand at that! The first couple of years of their marriage they lived up in the north; but then a year or so after my mother was born they came to live down here. 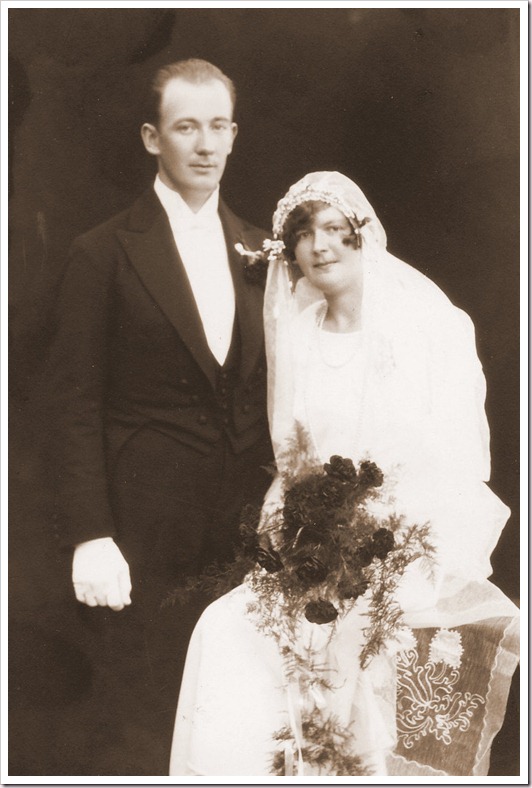 ▲ My paternal grandparents, Gustaf and Sally, 1930. 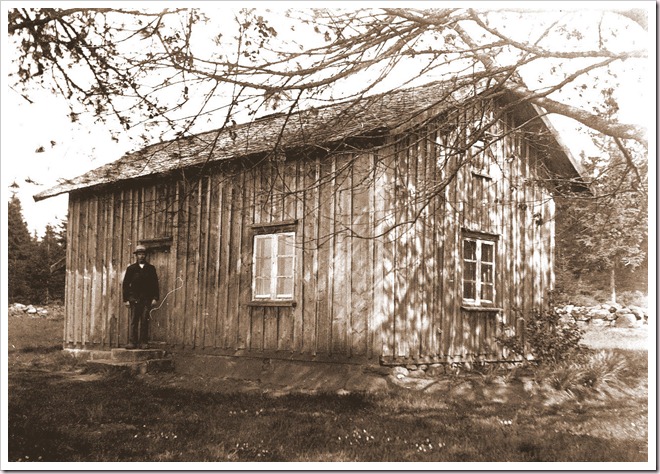 ▲The cottage where my grandfather Gustaf (born 1904) grew up. He was born ‘out of wedlock’ and was raised mainly by his maternal grandparents.

In his youth Gustaf started out as a shoemaker’s apprentice; but later became a journalist, photographer and editor at the local newspaper, with a special interest in local history. 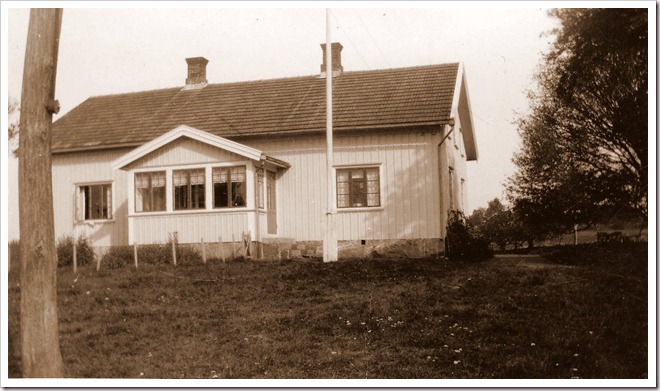 ▲ The farmhouse where my grandmother Sally (born 1900) grew up. She continued to live there until she got married at the age of 30. She never had a job outside the home.

Sally’s parents were both widowed when they got married to each other. The father had nine children by his first wife (two of them died before my grandmother was born), and the mother had one daughter from her first marriage, eight years older than Sally. When Sally was two, she also had a little brother.

Her half-siblings on the father’s side were all grown up, but some of them still lived on the farm in her childhood. The eldest half-brother (30 years older than Sally) remained single and took over the farm a few years before the father died in 1907 (when Sally was 7 years old). Another of the elder brothers later also moved back to help with the farm. From then until 1930, the family on the farm seems to have consisted of those two brothers + their father’s widow with her two daughters and one younger son. 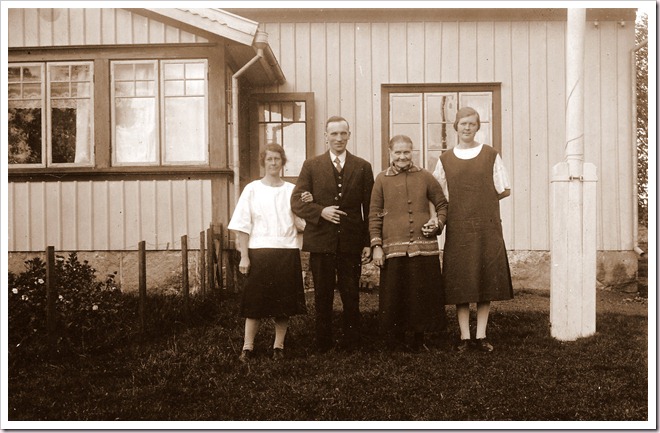 ▲ My grandmother Sally on the right; her sister and brother-in-law(-to-be) on the left, and their mother in the middle.

I’m not sure when or how Sally and Gustaf first got to know each other. I know that for a while before they got married Gustaf lived at the farm too, as a lodger, but I think that was probably after he and Sally got engaged. In 1930 they got married and moved into their own brand new house – but not alone. 1930 was a year of Big Change because all three the younger siblings got married and moved out. Sally’s sister and brother-in-law moved in with Sally and Gustaf in their new house, and so did their mother (69 years old by then). In my dad’s early childhood, they were still all an ‘extended family’: He and his parents living in one room and kitchen downstairs; his grandmother and aunt and uncle-in-law sharing the upstairs flat. Later, the aunt and uncle built their own house just down the road. The grandmother died in 1941.

One of the things that strike me from the family history is how both my grandfathers “worked their way up” from rather poor circumstances; and also how both grandmothers grew up in large extended families (but in houses that still suggest a somewhat higher standard).

Posted by DawnTreader at 07:44