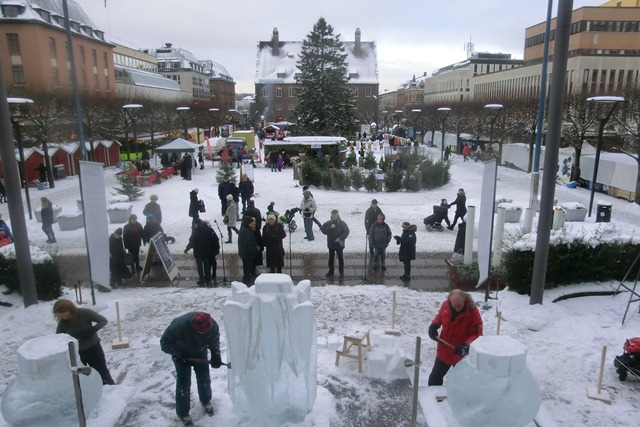 I wasn’t sure whether there were going to be any ice sculptures in the town square this year, as we also have the Buddy Bears exhibition going on… But we got the ice sculpture as well - and not just one, but three!

The theme this year is seedpods. The big one in the middle was carved by the same experienced ice sculptor as previous years, Ragnhild Sandelius Brodow, who has worked with the Icehotel at Jukkasjärvi near Kiruna far up in the north of Sweden. (That entire hotel is made of ice, including furniture and even the glasses in the bar. Follow the link to read more.) She got help with the two smaller ones by two local people. 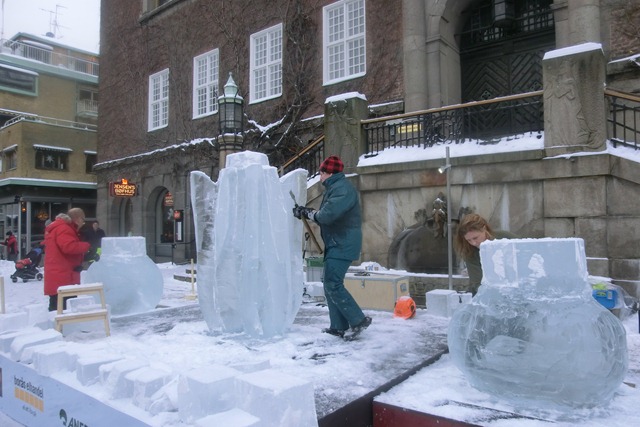 The artists worked all day, and in the afternoon, as darkness fell, they were finished: 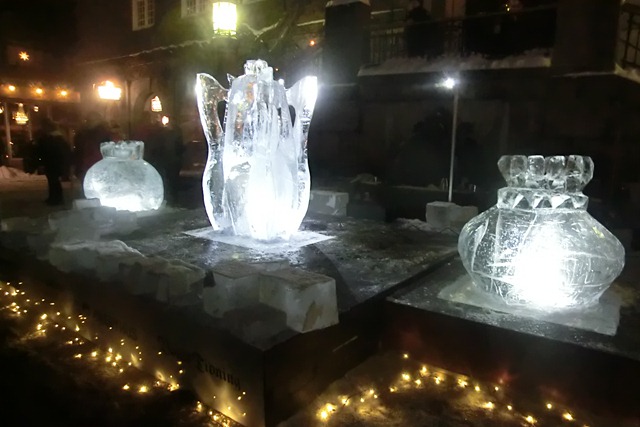 We also had the official crowning of Borås Lucia: 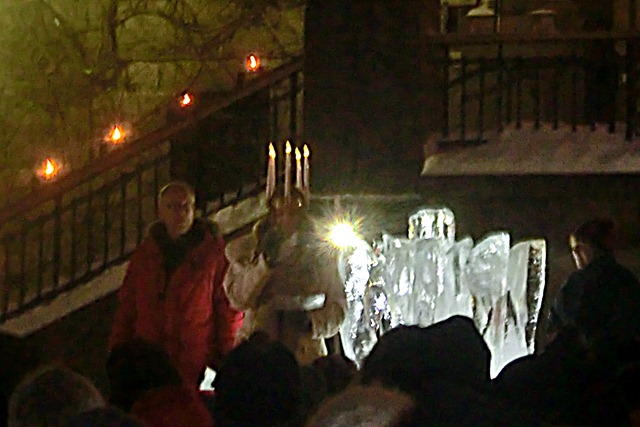 In Scandinavia, Lucia (St. Lucy) is venerated on December 13 in a ceremony where a girl is elected to  be Lucia. Wearing white and a crown of candles on her head, she walks at the head of a procession of more girls (and sometimes boys too). They sing Christmas carols and songs about St Lucy bringing light in the darkness. In one story about the Italian Saint Lucy who is supposed to be the origin of this tradition, she was working to help Christians hiding in the catacombs during the terror under the Roman Emperor Diocletian, and in order to bring with her as many supplies as possible, she needed to have both hands free. She solved this problem by attaching candles to a wreath on her head.

In Sweden it is common for each town to elect their own official Lucia with maids who go round to all sorts of places (like hospitals and nursing homes and schools and churches) during the month of December and sing their songs and collect money for charity.

I wasn’t standing close enough to be able to get good photos of the Lucia show, but the sound in the video came out good. It’s an Advent song (in Swedish):

The show ended with a short display of fireworks: 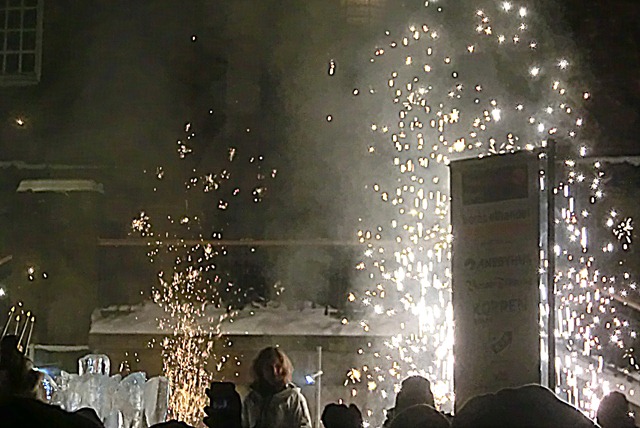 And then Lucia and her maids rode in a horse-drawn cart around the town square: 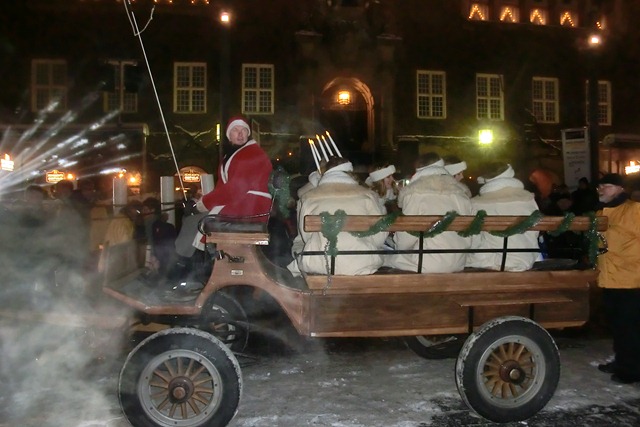 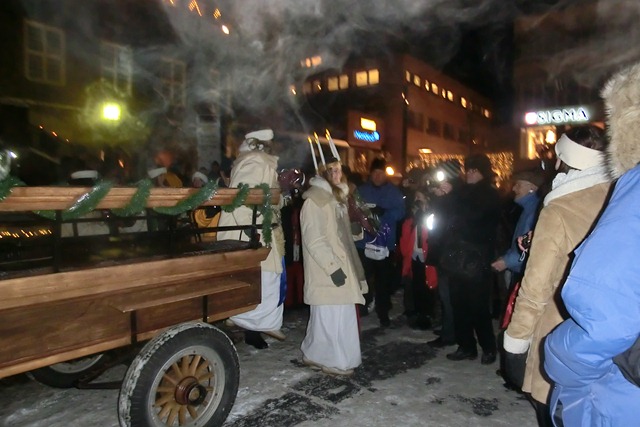 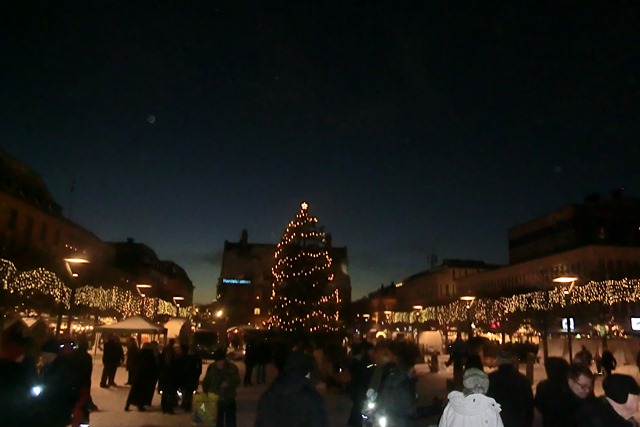 Happy 2nd Advent Sunday to you all! 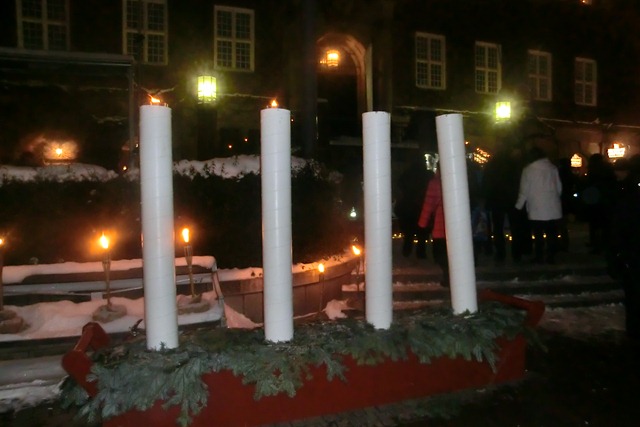 Linking to Straight Out of the Camera Sunday
(Most of the photos are straight-out-of, only the close-ups of Lucia and the fireworks were edited a little.)

Posted by DawnTreader at 20:37