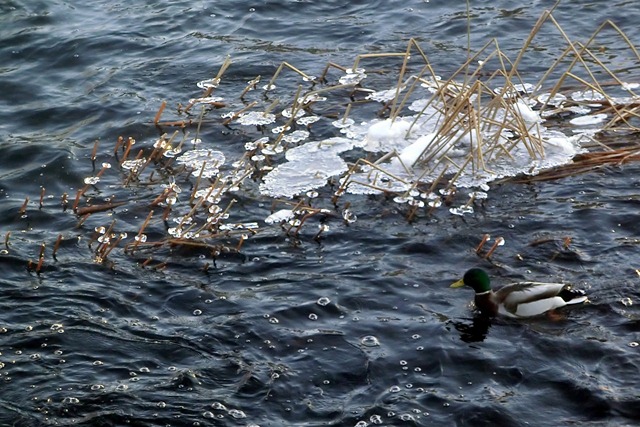 The photo is from last Thursday when it was still icy cold. Since then we had a rise in temperature, snowfall and wind and thaw and rain… I stayed in for three days; until this afternoon, when it seemed streets and walkways looked fairly walkable again (with most of the snow gone). Actually they were mostly walkable again – except here and there.

There’s a lot of “here and there” stuff going on in winter because each property owner is responsible for the pavement outside their own house or yard. And not everyone takes the responsibility equally serious.

Anyway I managed to get myself to a mailbox and a nearby store and back home again without accidents.

Maybe someone is curious how I ended up treating the dilemma presented in a previous post? After giving the matter a lot more thought than it was worth, I sent a printed Christmas postcard with no room for extra messages. (Why can’t I just make that kind of decisions straight away? It would make life so much simpler…)

Yesterday was a very frustrating day because I had constant trouble with my computer or broadband or one or more internet servers, and I wasn’t able to pinpoint where the fault might be – until in the evening, when the broadband gave up completely. Then I decided that had probably been responsible  for all the trouble the whole day (even though at times it seemed to be working) and went to bed with my Kindle and The Lewis Man (the book!)

Again, it would have been wiser of me to give up the internet much earlier in the day and just do something else with my time instead of keep trying to check every five minutes if perhaps...

This morning I slept late and after breakfast found myself in touch with the world again at normal speed.

New worries. Or not.

So it was not until the mail dropped in late in the afternoon that I needed to start worrying again…
(Bear with me, or stop reading here.)

No, nothing to do with Christmas cards this time.
The cause of worry was a letter from the landlord (=The City), giving a very complicated explanation (if it can be called that) of the expected procedure when next year they are going to install a new optic fibre cable in the building, to give us new options for broadband and TV and phones. This will probably be good once it’s all fixed; but my first reaction after reading the letter was PANIC, as it seemed that I may have to move lots of heavy furniture, like bookcases full of books. Which first of all I can’t do, and second of all, there’d be nowhere to put it all without it still being in the way.

Taking deep breaths, reading the letter again… It just makes no sense. Installing a new box in the hall, yes, that bit I understand. And it’s doable. But if they’re going to draw the cables from that box in the hall… Why on earth would they want to draw it (as they say their intention is) to the same place where my old cable socket is? – which means all around the living room, to a spot by the window, which is not a place where most people would want to have their TV anyway. (Well – at least I don’t, which is why I have extension cables from there and half way round the room to a place much closer to the hall…)

Next the letter says they’re also going to put an extra socket in the room next to the living room - which means the one I use as study. They don’t specify which wall in that room, but again it does not seem to make any sense to draw the cable across the room.

What would make sense, to me, would be to put both the new cable sockets next to the door between the livingroom and the study (which is quite close the hall, and also the same wall where I have the TV). That would involve a minimum of cable-drawing – and, as it happens, in my flat no need to move any furniture.

So… I think I shall try to put off worrying until I find out what it is they really mean to do…??

Posted by DawnTreader at 21:30