My Very Own Bear 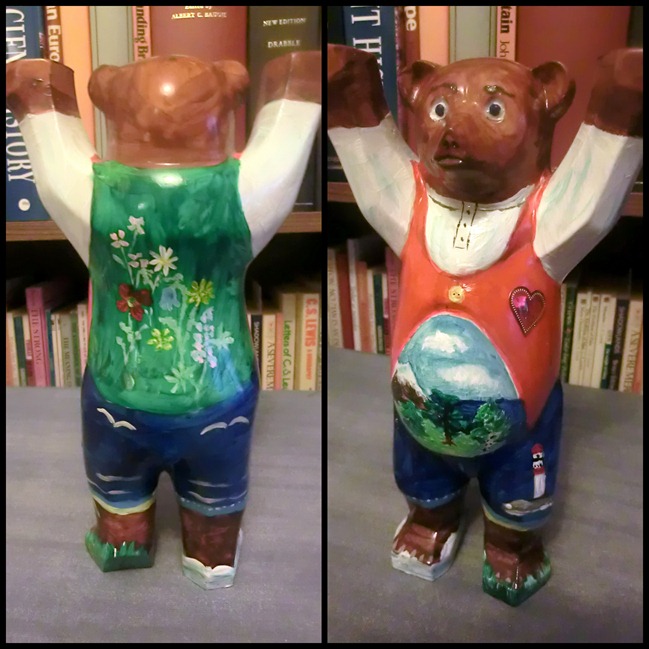 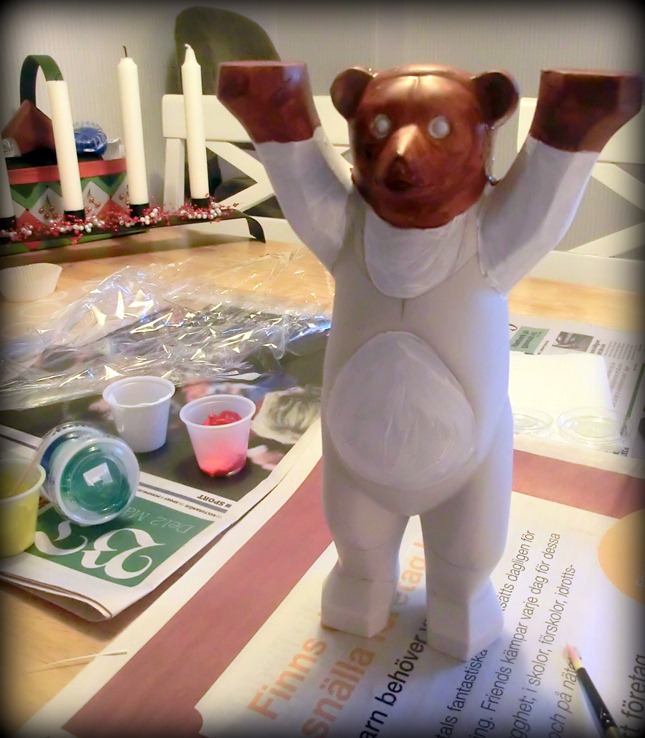 One of my Christmas presents to myself last week was to buy an unpainted mini-mini-buddy-bear with six little mini jars of paint and a brush, and get creative.

I used to do more of this kind of thing back in the previous century… (Painting I mean… I don’t think I ever did it on a bear before, though.)  Nowadays I have difficulties holding on to small objects for very long at a time (like pens and brushes); which is one reason I’ve shifted some of the creative energy into photography instead. But occasionally I still get that handicraft itch…

Not easy to keep two kinds of creativity going at once so I was already well into the project before I remembered to take a “before” photo. The original non-colour was the greyish hue you see in the second picture. As for the creative process in my mind, it went something like this:

I think I like my bear to really be a bear. A brown bear… We do have brown bears in Sweden.

Problem: The colours in my little jars are black, white, red, yellow, green and blue. No brown! Well, red and yellow make orange, and if I add a little black… Yes, that will work.

I have a Winnie-the-Pooh bear I got from a friend years ago. He’s got a little red vest on… This bear too has kind of the right shape for such a vest…

Old Swedish folk costumes have little vests too. With long-sleeved white shirts under. And knee-length trousers with ribbons and tassels just under the knee.

The folk costumes do remind mostly of midsummer traditions… I’ll paint the back of the vest green, like a summer meadow. At midsummer, the custom is to pick seven different flowers and put under your pillow and then you’re supposed to dream of whom you’re going to marry…

Blue for his trousers, I think. Sometimes in summer you roll your trousers up to your knees (if you’re not already wearing shorts!) and wade out into the water. Why not hint waves and a couple of gulls on the back… And a lighthouse. Summer by the sea. A blue/yellow ribbon at the bottom of one trouser leg (the colours of the Swedish flag). The other leg… perhaps reminding more of rolled-up jeans? Mix of old and new fashion.

With the folk costumes they wear stockings and shoes… But no, I want my bear barelegged and barefoot – one paw in the green grass of summer, the other in snow. He’s got fur – he can take it… :)

Now the front of his white shirt over his tummy is a blank white canvas still waiting to be filled. I think we need a landscape… Trees. Grass. Water. Sky. Mountains… Snowcapped fells. Sweden in a nutshell.

Posted by DawnTreader at 15:47