The Phoenix and the Carpet
by Edith Nesbit
(1904) 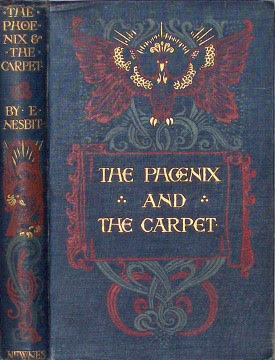 Sequel to Five Children and It.
In this book the children are left alone (in the care of servants) quite a lot in their London home, while their parents are off on various business and trips. Their mother buys a second hand carpet for the nursery. The children find an egg rolled into it, which hatches in the fire into a talking Phoenix. Much the same sort of adventures as in the first book continue to happen, as the carpet can also grant wishes. The Psammead (sand-fairy) from the first book does not appear “in person” in this one, but is referred to.

I found this book as entertaining as the first one, and also interesting from historical point of view (London in the early 20th century). Among the places the children visit is the Phoenix Fire Insurance Company (which the Phoenix assumes to be his Temple).

Fire is a theme throughout the book… There is of course a fireplace in the nursery – no central heating back in those days! I have to admit that had I had children, and read this book with them, I might have got a bit paranoid about locking away all matches and lighters safely out of reach… But since no children, I don’t need to dwell too much on that aspect :)

‘The people who decide what the weather is to be, and put its orders down for it in the newspapers every morning, said afterwards that it was the hottest day there had been for years. They had ordered it to be “warmer—some showers,” and warmer it certainly was. In fact it was so busy being warmer that it had no time to attend to the order about showers, so there weren’t any.

It is very difficult to remember things in the dark, unless you have matches with you, and then of course it is quite different, even if you don’t strike one.

The sound of a bell is quite different, somehow, when there is someone inside the house who hears it. I can’t tell you why this is—but so it is.

Robert stuck steadily to his point. One great point about Robert is the steadiness with which he can stick.

‘I do know a lot of French,’ whispered Robert, indignantly; ‘but it’s all about the pencil of the gardener’s son and the penknife of the baker’s niece---nothing that anyone ever wants to say.’

Don’t trample on its feelings just because it’s only a carpet.

That is one of the most annoying things about stories, you cannot tell all the different parts of them at the same time.

‘But it’s true,’ said Jane. ‘Of course it is, but it’s not true enough for grown-up people to believe it,’ said Anthea. 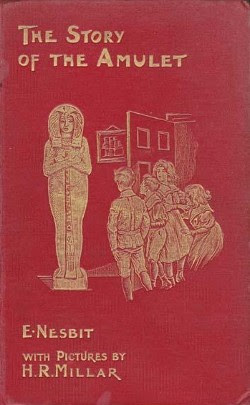 The Story of the Amulet is the third book in the Psammead trilogy.

In this book the four older children are separated from their parents and their baby brother for a longer period of time. Father is off abroad working, and Mother, with the baby, is away on Madeira recuperating after an illness.  The children are staying with an old nurse who has a boarding house near the British Museum. While the children are staying she only has one other boarder, an old learned man who is an Egyptologist.

The children miss the country house where they spent last summer (and where they first found the Psammead, a sandfairy who can grant wishes). However, they decide to make the most of all the things there are to see in London for free (or almost).

They start by exploring some markets and shops in the neighbourhood, and there they happen to find first the Psammead in a pet shop, and then (half) an old Egyptian amulet. The Psammead can no longer grant wishes to the children (only to other people), but the amulet turns out to to be new gateway to adventures for them, as through it they can travel to other times and places where the amulet has at some point been. The Psammead goes with them, and the learned Egyptologist gentleman gets involved as well (but he of course keeps thinking that he is only dreaming…) Besides Egypt they also visit ancient Babylonia, Atlantis and the Phoenician city of Tyre. They also meet Julius Ceasar before he invades Britain, and even manage a trip into a utopian future.

Comparing this book to the first and second in the series, there is a definite development towards more and more complex fantasy-adventures.

It got obvious to me during the reading of this last book especially, how strongly influenced by this story that C.S. Lewis must have been when writing his Chronicles of Narnia. And I’ll dare a bet that J.K. Rowling read it as well!

Edith Nesbit dedicated The Story of the Amulet to Dr Wallis Budge, an English Egyptologist, Orientalist and philologist who worked for the Department of Egyptian and Assyrian Antiquities in the British Museum – “as a small token of gratitude for his unfailing kindness and help in the making of it”.

‘This isn’t tomorrow!’ ‘Is it still yesterday?’ asked Jane. ‘No, it’s today. The same as it’s always been. It wouldn’t do to go mixing up the present and the Past, and cutting bits out of one to fit into the other.’ ‘Then all that adventure took no time at all?’ ‘You can call it that if you  like,’ said the Psammead. ‘It took none of the modern time, anyhow.’

‘The present’s the present and the past’s the past.’ ‘Not always,’ said Cyril. ‘When we were in the Past the present was the future.’

The Past’s as full of different times as—as the sea is of sand.

Besides enjoying the humour and language and story-telling in this trilogy I also found it interesting from historical and literary history perspective. I’m a little surprised that I’ve not heard more about it; but checking up on it, it seems only some of Edith Nesbit’s books were translated into Swedish at all, and I’m not sure this particular trilogy was available in Swedish in my childhood.

I’ll continue to read some more of her collected works in between other books. I have not yet decided which one to read next.

Posted by DawnTreader at 20:43