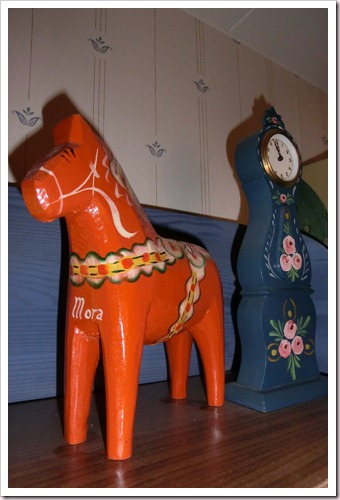 A Dalecarlian horse (Swedish: Dalahäst) is a traditional carved and painted wooden horse from the Swedish province of Dalarna. The earliest references to wooden horses for sale are from 1623. Originally it was a children’s toy and usually unpainted; in the early 19th century it became common to paint it in a single colour, and later also to decorate it in the traditional  kurbits style (a kind of folk art from this part of the country). Today the colourful wooden horse is a symbol not only for Dalarna but for Sweden in general; it is a very typical souvenir for tourists to bring back home.

Dalecarlian horses come in different colours and sometimes with distinguishing features depending on where they are produced. The most common kind is bright red with kurbits style harness.

Mine (above) has the name Mora is painted on the front: that’s the name of the town in Dalarna where it was made and/or bought. I seem to remember I got it from my parents when they had been away on a holiday trip without me (leaving me to stay with my grandparents). The clock (a model of a longcase clock also called a Mora clock) was most likely bought on the same trip, and from my photo album I can date that as coming into my possession at Christmas 1961 (when I was six years old).

However, what inspired me to this blog post was some works of contemporary art that I found recently on an outdoors wall at a hotel/restaurant in town: 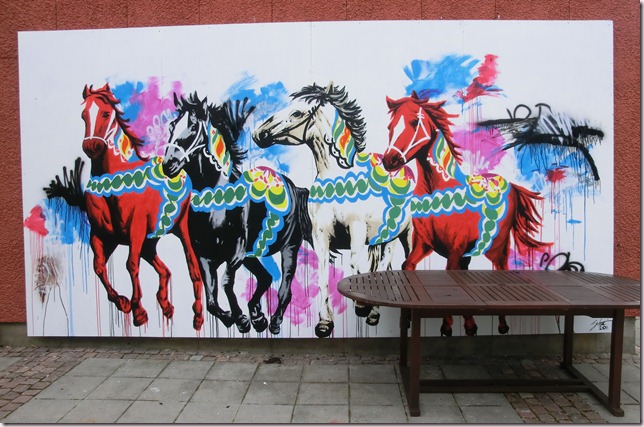 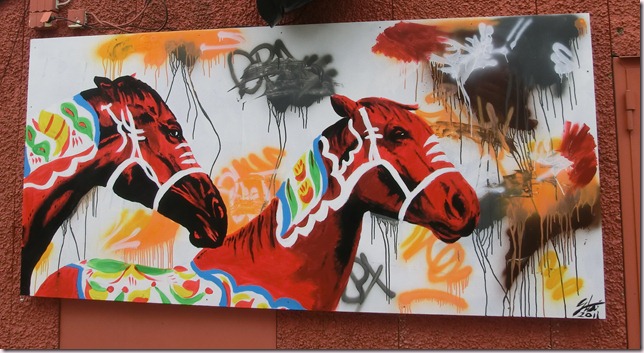 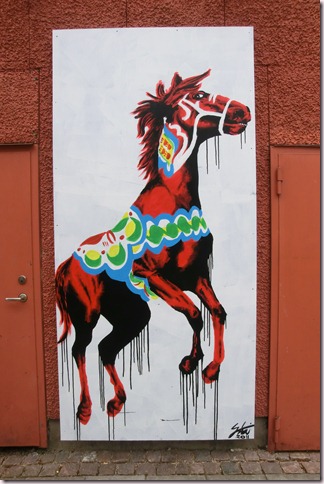 This is just so not how we are used to seeing our sturdy carved wooden horses. I found the mix of Dalecarlian horse and ‘Wild West’ quite amusing. But I guess to see the fun of it you really have know the original. Our traditional wooden horses are always standing so very steadily on their four stout legs – there is not even a hint of movement in them. To see them galloping about really messes with the mind!

Posted by DawnTreader at 09:35