Book Review: The Lewis Man by Peter May 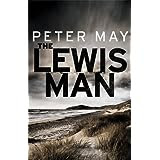 The Lewis Man by Peter May is the second book in a trilogy set on the Isle of Lewis off the west coast of Scotland. I went pretty much straight on to this one after the first one in the series, The Blackhouse (which I blogged about two weeks ago).

A MAN WITH NO NAME
An unidentified corpse is recovered from a Lewis peat bog; the only clue to its identity being a DNA sibling match to a local farmer.
A MAN WITH NO MEMORY
But this islander, Tormod Macdonald - now an elderly man suffering from dementia - has always claimed to be an only child.
A MAN WITH NO CHOICE
When Tormod's family approach Fin Macleod for help, Fin feels duty-bound to solve the mystery.

Some six or eight months have passed between the previous book and this one. Fin Macleod has resigned from his police detective job in Edinburgh and is back on Lewis for private reasons. While in the first novel his personal experiences and memories from growing up on Lewis came to play a part in unravelling the crime he was then sent there to investigate officially; in this book it is (sort of) the other way round. When he gets involved in a case involving an old unidentified corpse just found in a peat bog, this is because of his private connections on the island, and not as an official police detective. But still experiences from his previous job gets integrated with his inofficial quest.

Like in the first book, the landscape and climate is still very much interwoven with the events and the characters. All the time in the background, you feel the weather. I don’t think I've ever come across an author with quite the same skill to make the descriptions of nature inseparable from the story itself.

The wind howled its disapproval all around them.

The sun had rediscovered its warmth, and fought to take the edge off the wind.

Heavy low cloud scraped and grazed itself against the rise and fall of the land, pregnant with rain, but holding it still as in realisation that the ground below was already beyond saturation.

In this novel too, we get the story served in parts, and from different narrative and time perspectives. In this book, we are also faced with the added complication of old age dementia. I kept thinking of my own father (who suffered from this in the last years of his life), which at times made it a somewhat 'uncomfortable' read  (stirring up my own emotions and memories). But at the same time, I have to say I'm really impressed with Peter May's respectful attempts to describe and unscramble the old age ”clouds of the mind”, involving all sorts of odd mix-ups of people and places and times.

'We walk into that nursing home, and all we see are a lot of old people sitting around. Vacant eyes, sad smiles. And we just dismiss them as … well, old. Spent, hardly worth bothering about. And yet behind those eyes every one of them has had a life, a story they could tell you. Of pain, love, hope, despair. All the things we feel, too. Getting old doesn't make them any less valid, or any less real. And it'll be us one day. Sitting there watching the young ones dismiss us as … well, old. And what's that going to feel like?'

Just as with the first book, with this one too I found it harder and harder to put it down as the story began to draw to a close... Parts of the ‘main plot’ are perhaps not quite as believable as the general setting – but I'll give it at least four stars (out of five). **** I find Peter May a really talented writer who must also be putting a lot of effort into his background research.

Some more quotes I highlighted during the reading:

When you are young a year is a big part of your life and seems to last for ever. When you are old, there have been too many of them gone before and they pass all too fast. We move so slowly away from birth, and rush so quickly to death.

He wore dark-grey suits that concertinaed around thick black shoes which squeaked on the tiles so that you always knew when he was coming, like the tick-tock of the crocodile in Peter Pan.

No carved stonework or religious friezes, no stained-glass windows, no bell in the bell-tower. This was God without distraction.

You only have to look around you, and life will always remind you that you are not like others.

And he realized that you can never tell, even when you think you know someone well, what they might have been through in their lives.

Posted by DawnTreader at 13:20