The small town of Sunne is situated in between two connecting lakes. The name is derived from the Swedish word sund = strait (narrow passageway connecting two bodies of water). And it's called fabulous because of famous local authors having preserved and continued  old folklore traditions from that area in Sweden. (Most famous of them all, Selma Lagerlöf - see previous post.) 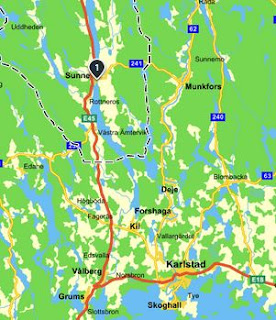 Sunne was at the northern end of our Monday daytrip from Karlstad. We only made a short stop there, coming there from Selma Lagerlöf's Mårbacka to the southeast, and crossing the bridge at Sunne to then drive down on the west side of the lake. 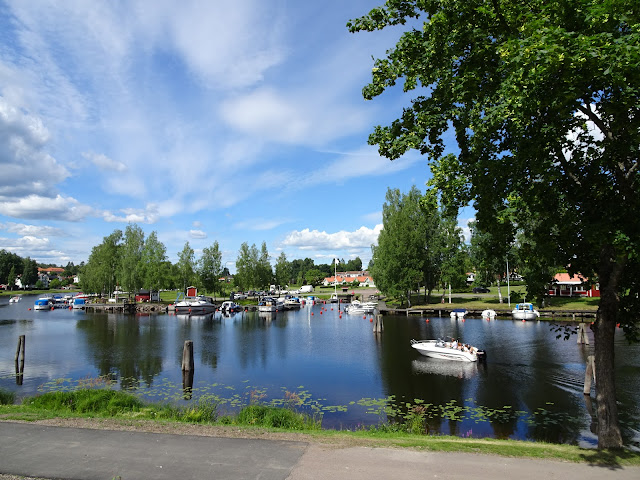 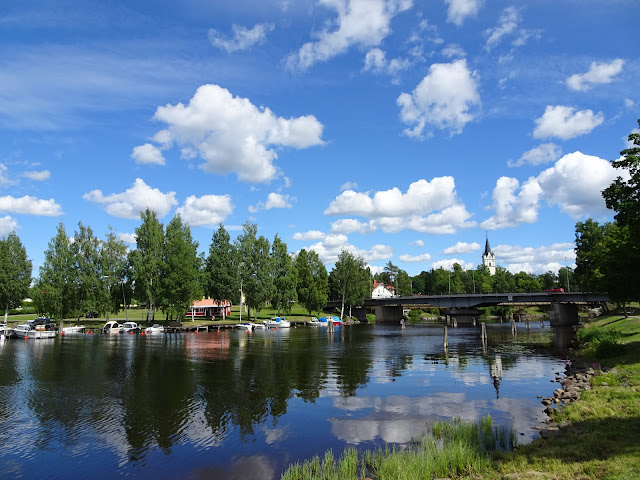 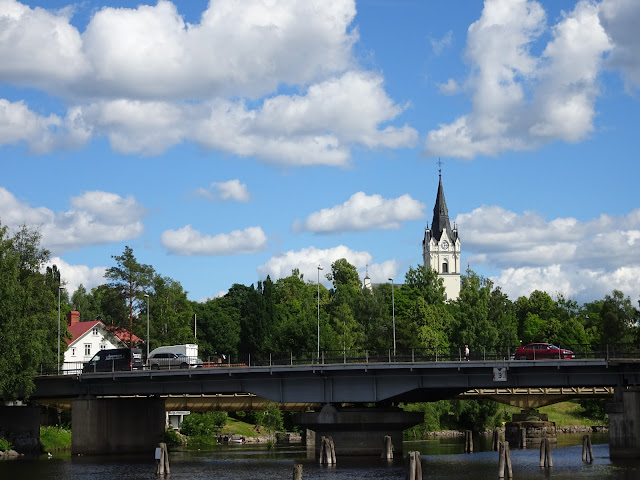 Not far from Sunne, on the other side of the lake, you'll find Rottneros Park, another famous place associated with Selma Lagerlöf. It is a sculpture park featuring a combination of formal park areas, natural parkland and 'creative horticultural design'. It all started in the mid 1950s with a man by name of Svante Påhlson, who designed a manor house there to match the fictional Ekeby in one of Selma Lagerlöf's novels - Gösta Berling's Saga.

The park covers a very large area, and we soon realized it would be too much for us to walk around the whole park. So we concentrated on finding our way to the manor, and from there to a sculpture of Selma Lagerlöf that I remembered from a previous visit (back in the 1990s); but then skipped the more remote parts of the park, and just explored some of the various older 'garden rooms' along our way back to the entrance again. 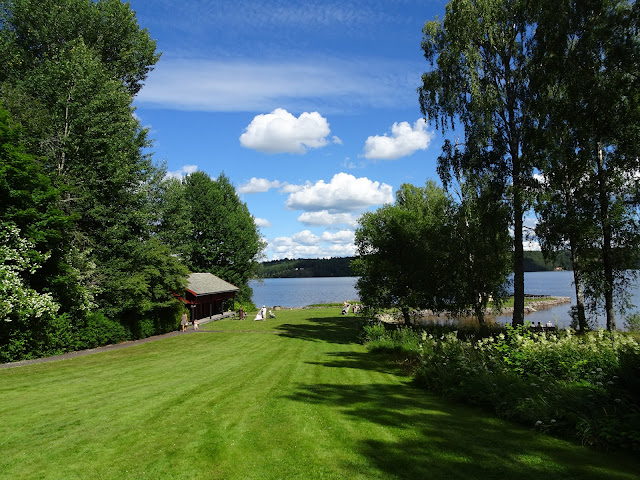 We walked downhill behind the manor to the lake, and finally found the the Selma sculpture - much further down than I remembered! (phew) 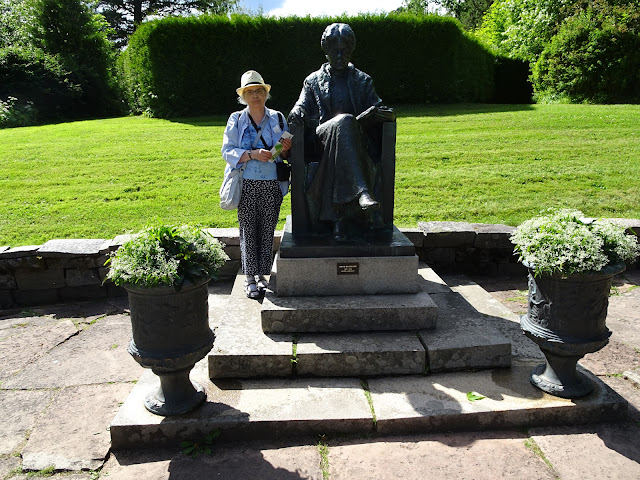 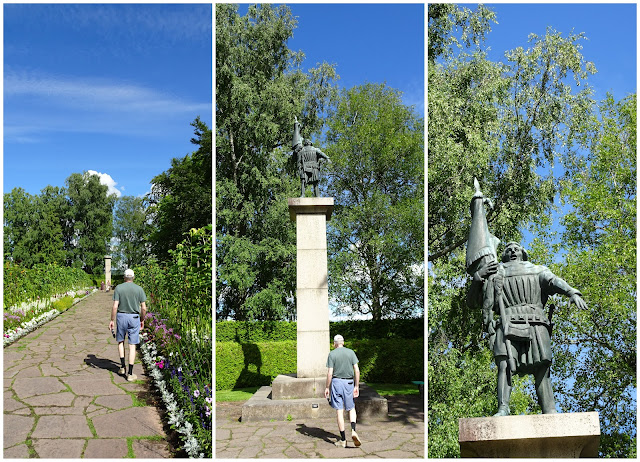 Quite a long way to walk up close to this sculpture as well (even if on flat ground). And by now I've completely forgotten who it was on top of that pillar anyway! ;) 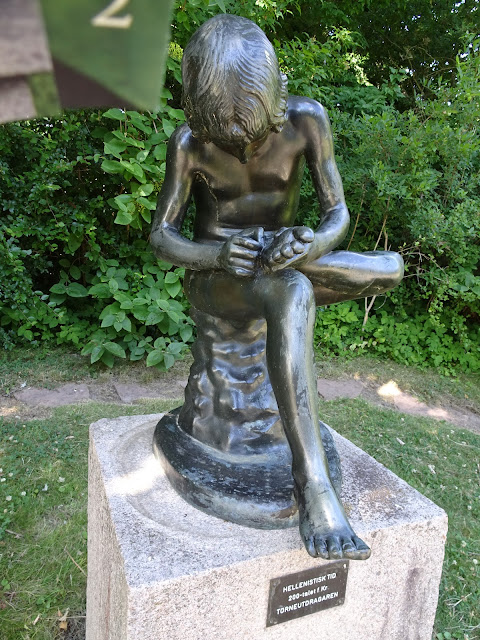 I felt sympathy with this little guy - trying to extract a thorn from his foot... I think it's a bronze copy of an older sculpture from 200 B.C.

And the bronze horse below I think was a copy of an older sculpture as well. 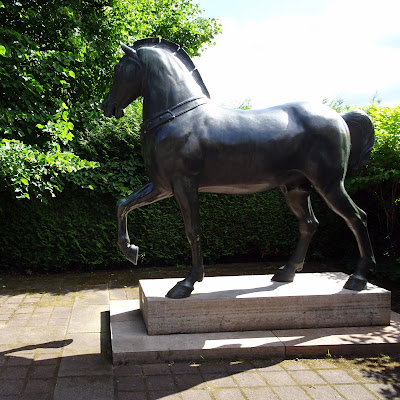 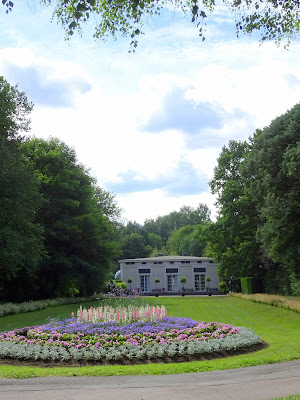 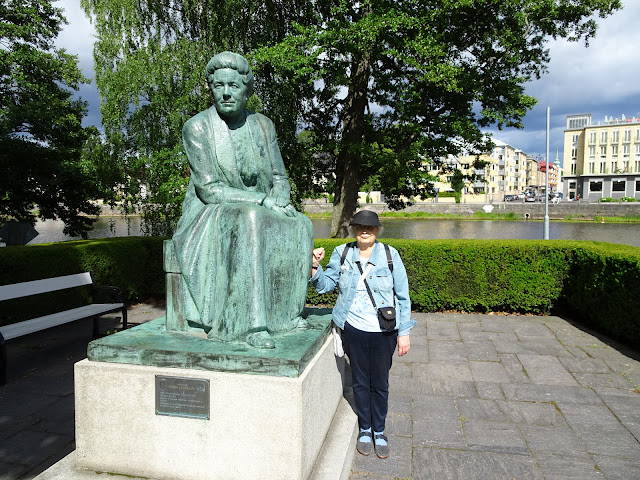 Hello again, Selma! - Me with a another sculpture of the famous author... (This one sits in a little park between where my brother lives and the city centre, in Karlstad.)

Posted by DawnTreader at 19:42