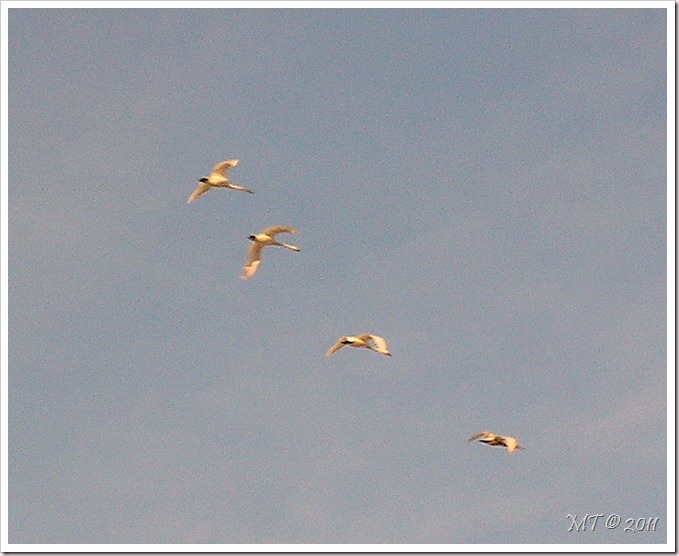 What is big, white, and flies north as early as 9th February, while making a loud honking kind of noise? I think I have to stand by my first thought, which was “whooper swans" (Cygnus cygnus)! Or, as we call them in Swedish: “sångsvanar” ~ singing swans.

What first drew my attention to them was the noise. If you follow the link above, you can listen to the sound from that page.

Altogether I saw probably a couple of dozen of them or more, but flying in smaller groups, either like this or in the plow-form. The first two or three groups were hidden from view for me behind buildings and trees until they were already too far away for me to have chance to catch them with my camera. But then there were these two smaller groups that came a little bit behind… I made an attempt…

Oh, I really need to get myself I camera with more zoom! And maybe it had better be one that is able to record sound as well.

Doing my research on the internet when I got home, noting the English name whooper swan, and listening to recorded sounds… a line from a song by Paul Simon popped into my head (from the album Surprise):

… Acts of kindness, like rain in a drought,
release the spirit with a whoop and a shout…

Yes. That’s it. They were whooping and shouting for joy.