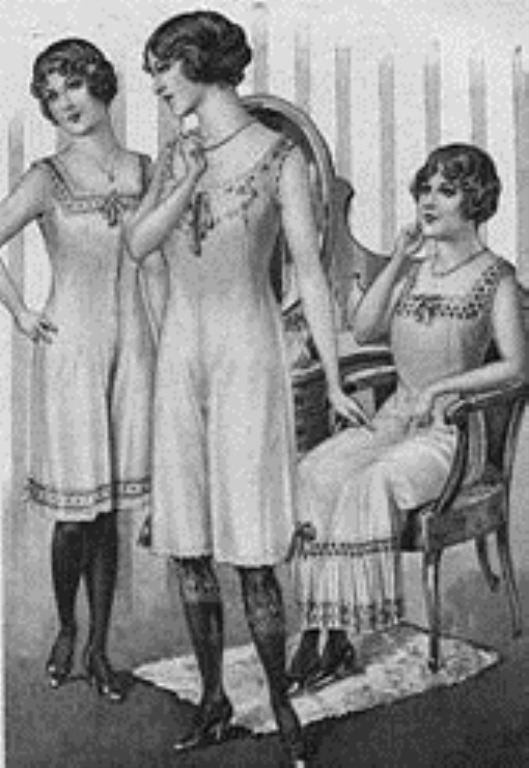 Oh dear. Yesterday was obviously not one of my best shopping days. Not only did I come home with an almost identical teapot to the one I already had. Guess what else I did? (Gentlemen, please stop reading here.) I happened to buy some underwear designed for pregnant women!!! … Oh, I know my waistline is no longer what it was. Nor can I claim it was ever really what the fashion magazines keep suggesting it ought to be. That’s why I grabbed the first thing I saw in the store that seemed to have just a little bit more fabric to it than a gee-string… (My male readers are still with me, aren’t you?) Not until I tried on my purchase at home in the evening did I realize what it was that I had bought...

These were meant to grow in! The thing is, I’m not supposed to do that. (So I really shouldn’t be buying garments that encourage it!) My doctor (a nice woman about the same age and size as myself) had just been putting a measuring tape round my waist the same morning, excusing herself: They have to do that nowadays, it’s routine! Well, I’ve had to step onto their scales for years (and I do occasionally use my own at home as well) so I assured her the use of a measuring tape as well did not really come as a very great shock to me. (After all, I have had more unpleasant things than that done to me in a doctor’s office!)

On the whole I got through the medical check-up okay, i.e. nothing new turned up that I’m not already aware of. Blood pressure was okay (on medication since my 30s). Cholesterol levels still not alarmingly high. Other blood tests normal as well, including the thyroid hormone levels (in spite of being diagnosed with goiter last year). No new medication needed, except some eye drops that I asked for. (My right eye still troubling me.) Still left with a list of fifteen different “drugs” though... (Including the ones I only need during the allergy season, i.e. ~ 7 months of the year...)

On Thursday, I had been able for the first time in a couple of months or so to walk “in strides” (well…) most of the way from home to the supermarket, and without ice creepers on the soles of my shoes as well, since the sidewalks were nearly ice-free. Oh, I’ve missed that feeling...! There’s not much hope of spring yet, though. On Friday, when I had to go out early again for the doctor’s appointment, I woke up to this (or worse): 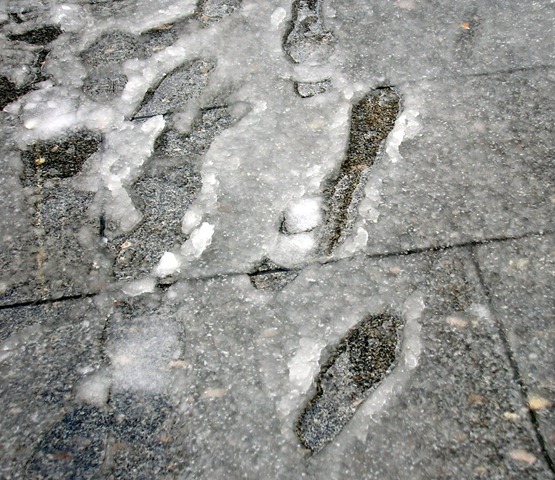 The ground was again covered with a rather thick layer of very wet snow/ icy slush. For a while I wondered if I’d have to get a taxi; but I was able to get myself to the bus stop.

Today I was woken up around 5 am by a snow plow. My head was immediately filled with images of unexpected heavy snowfall during the night; but when I got up and looked out the window, there really didn’t seem to be much to plow. I guess they were just trying to scrape the roads bare before it freezes again. So I guess I should be thankful for that, even if it goes a bit beyond my understanding why they go plowing seemingly bare ground at 5 am on a Saturday, when they rarely bother to come round here before 8 on a snowy weekday! 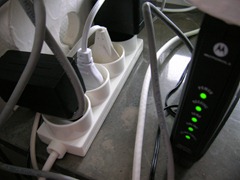 While I was in town anyway, plodding my way through the slushy streets, I also went to pick up a test modem at my cable company yesterday, as suggested by their support desk on Monday. I plugged it in when I got home and so far (24 hours) I have not noticed any breaks in my internet connection since then. I’m not sure exactly what that proves though, since I noticed none in the previous 40 hours before I made the switch either! I’m supposed to return the test modem on Tuesday afternoon at the latest.

Today, we have +5°C and a storm warning issued. I didn’t really get that either when I looked out the window at breakfast.  The kitchen window faces NE; as does the bedroom. Coming into the study later on, on the other side of the building… Now I get it, because the wind comes from the west, and on this side it also has a lot more to rattle about (the balconies). Here the west wind often sounds worse than it is when you actually go out.

So just now the question is: Stay in, or dare a short walk after all? (Not raining at the moment, and the streets more or less ice free, although with the odd little lake here and there.)

Oh I guess I need to take the garbage out anyway. So I’ll do that, at least, and see what it feels like when I get outdoors…

Have a Nice Weekend!

Posted by DawnTreader at 11:54