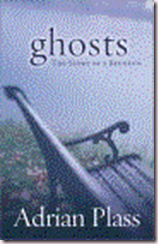 Adrian Plass: Ghosts – The Story of a Reunion

I took me a long time to read this book (starting it before Christmas and not finishing it until mid January), but that probably has more to do with “me” than with the book  (for one thing, problems I’ve been having with an eye!).

It might be a good idea to give this book a more concentrated reading, since the basic story takes place over one weekend. On the other hand, it deals with memories and feelings, and such things can benefit from slower digestion.

The narrator of the story, David, is a widower since 6 months, grieving his beloved wife Jessica. One day he gets an invitation from his wife’s old friend, Angela, whom they both knew back in their youth. Angela says she has something for him that Jessica wanted him to have; but to get it he has to come to a weekend reunion with her and a handful of other old friends who were in the same church group back in their youth.

The house where they meet is said to have its own ghosts; but the ones David and the others find themselves facing during the reunion weekend are their own inner fears and secrets.

As one review puts it, the book is perhaps a bit “preachy” (for a novel). On the other hand, I think the fictional story perhaps serves to make the reader “think”, rather than just either obediently swallow or categorically reject what is said. On the whole my guess is that at least people with some experience of similar church background might see themselves and people they know reflected in it. (That is usually Adrian Plass’ strength.)

Here are some quotes:

“Some truth – quite a lot of truth – is slippery and elusive like a wet bar of soap. Just as you think you’ve got a grip on it and you’re looking forward to feeling clean, it slides away.”

(About losing someone you love through death):

“It’s just plain horrible. There’s nothing else to say. There’s no way round it --- The reality is you fall to pieces inside every day when you wake up and find that it wasn’t a nightmare after all.”

“I found myself hating God for being perfect – someone you can’t blame for anything, like a massive face of rock you know you’ll never be able to climb because there’s nowhere to put your hands or feet.”

“Pearls are valuable things. They’re beautiful, and they’re what you get when God transfigures things that could have turned very ugly.”

Posted by DawnTreader at 19:17