The Journey Continues - Beyond The Lone Islands

Two years ago, on 5 January, 2009, I started my first blog - The Island of the Voices. The suggestion was first raised to me by my Australian pen-friend Rose-Anne whom I knew since way back in the times when paper and pen and stamps were needed for correspondence. I created a Blogger account to be able to comment on her blog; and then I thought... why not explore a bit further...?

One of the first things to decide when starting a blog is of course the name. I explained my original choice in my first blog post:

“After some trial and error, it seems I have created a blog!
In choosing the title, I had in mind the Island of the Voices in C.S. Lewis's The Voyage of the Dawn Treader, where Lucy enters a Magician's House to find the Magician's Book, and within that book A Spell to make hidden things visible.

She read it through to make sure of all the hard words and then said it out loud. And she knew at once that it was working because as she spoke the colours came into the capital letters at the top of the page and the pictures began appearing in the margins. It was like when you hold to the fire something written in Invisible Ink and the writing gradually shows up...

I really have no clear idea yet what hidden things I want this blog to make visible. But maybe if I start writing, I will find out...“

That first blog post has remained kind of prophetic to me. I had little idea back then how hooked I would get on blogging, how much it would inspire me to keep up both writing and photography, and how many new friends I would be making around the world... And yet I obviously sensed the "magic" and the spirit of adventure involved already at the very beginning; or I would not have chosen the names that I did.

After nearly two years of blogging (you'll find more details about my blogs and blog history if you click on the My Blogs tab at the top of the page), I found that I would soon be reaching the limits of my free Picasa Web Album. Weighing some pros and cons and alternatives, I decided to start over in a new account. Not just out of reluctance to pay for increased storage... I'm also hoping that starting afresh might be a way to take advantage of some lessons learned along the way (about things like blog layout and editing and organizing web albums), without messing up the old posts.

I started by moving my Picture Book in mid December, 2010. If you haven't discovered that yet, here's a link to DawnTreader's New Picture Book.

Now the time has come to also take the plunge with what I still regard as my 'main' blog. In connection with that, I decided to also change the name to Beyond the Lone Islands. From comments in the past I've understood that the old name has seemed a little obscure to some readers. The new name comes from the same story (The Voyage of the DawnTreader, one of the Chronicles of Narnia by C.S. Lewis) but I'm hoping that it will perhaps seem more comprehensible even for readers not familiar with these books. Besides... While The Island of the Voices is just one of several islands on the way, going "beyond the Lone Islands" is the goal of the whole journey...! So for myself as well, I’m hoping that it will be a symbol of wanting to “move on”.

I will probably keep fiddling about with the layout for a while, adding more links and lists etc. But... It seems somehow fitting to once again make a new start on the first Monday of a New Year... So here we go!

The new blog address is http://dawntreader-island2.blogspot.com.
(... gives me some room in case I should again want to change the name…)

My apologies for the inconvenience the change of blog address might cause my faithful readers - I can only hope that you will find it worth your while to sign up again as follower, and/or make changes in you link lists etc.

I decided to include the first blog header as a photo within this post as well, because then when I change the header, this one will still remain connected to the first post.

Here is “the bigger picture” of the surroundings of the little "island of ice" that has built itself around the reeds in the middle of a dam in the river: 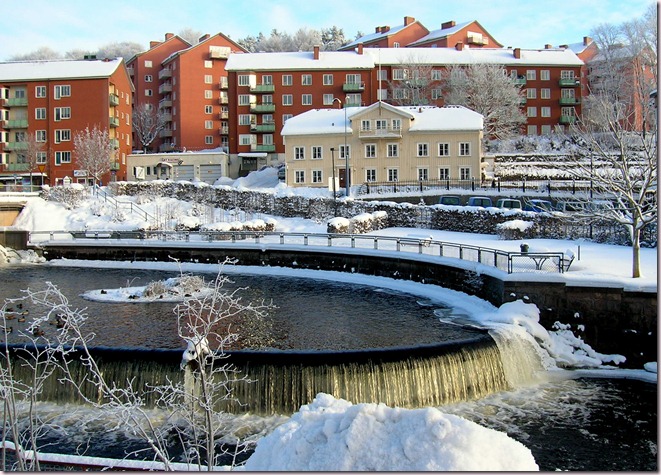 December 2010 broke a lot of records as the coldest and snowiest early winter in around at least 150 years or so almost all over Sweden - in fact, as far back as official records of temperature have been kept in most towns. Most of the river running through our town is covered by ice and snow since weeks back. This is one of the few spots where there is still open water for the ducks to enjoy.