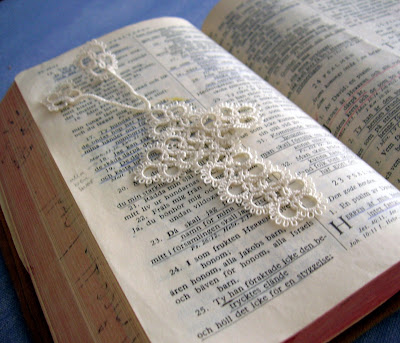 
Deb asks: What’s the largest, thickest, heaviest book you ever read?
Was it because you had to? For pleasure? For school?
Counted in number of pages or words, it has to be the Bible. The thing with Bibles, though, is that they are usually in small print on very thin paper, which makes it possible for a book like Harry Potter and the Order of the Phoenix to compete in weight and thickness!

First time I read the Bible all through from the first page to the last, I was 14 years old. It was not forced upon me. I had already completed a year of confirmation classes in the Church of Sweden without any quite such heavy homework. In fact, judging by the inscription in my first Bible, it seems we were not presented with The Book until at the actual confirmation.

In spite of being 'confirmed', I was not yet at that age 'convinced'. But since I had the book, I decided to read it. I can't recall much from the confirmation classes, but what the vicar said when he gave us the Bibles made a lasting impression: He pointed out that the Bible was not meant to be a bookshelf ornament, but to be read and studied, and we should not hesitate to underline things or to make notes in it.

I don't remember how long it took me, but I did read it, starting with Genesis and ending with Revelations. Then I lay it aside, still 'unconvinced'. It was not until a year or two later, at the age of 16, that I started calling myself a believer. But it's probably only a couple of more times that I have read the whole Bible through in that precise order, 'from start to finish'. I have it in a number of different translations though, both in Swedish and English. 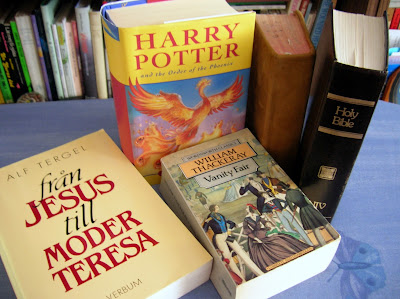 Besides one Bible in each language, I picked out three other large, thick, heavy candidates.

From Jesus to Mother Teresa. 560 pages church history. Not only big and clumsy, it was not exactly 'light reading' either! That one was compulsory reading, but for volontary studies. Theology long distance at 1/4 speed for 4 years in the early 90s. (Four years of part time studies corresponding to one full time introduction year at a theological seminar. We had four weekends per year at the school and the rest of the work was done in my spare time at home; while working full time in the daytime.)

Vanity Fair by Thackeray. That's my thickest paperback novel, 950 pages. My copy was printed in 1992 which means it was not university reading. So I must have decided to buy it and read it of my own free will! (I do have a sort of standing project ever since my uni days, of continuing to read old classics that are frequently referred to, but were not included in my courses.) Originally this book was published, Dickens-style, "in one shilling numbers, beginning in January 1847, with illustrations by the author". (My copy lacks the illustrations, it's all pure text.)

Harry Potter and the Order of the Phoenix. The fifth book in that series, and the longest - 766 pages. For me it was the first in the series that I bought in English on the first day it was released, in the summer of 2003 (only having listened to the previous four as audio books in Swedish before that). I remember reading it more or less non-stop in two or three days. It is not J.K. Rowling's own favourite (according to interviews), but it remains mine, because I was so very much "in sync" with the feelings in it that first time I read it.

I do have other books on my shelves that are even bigger and heavier; but those I cannot claim to have read from the first page to the last. They are dictionaries, encyclopedias, history books or Illustrated Complete Works of... (Shakespeare, for example), which I have only used to look things up in and read parts of.
Posted by DawnTreader at 17:02