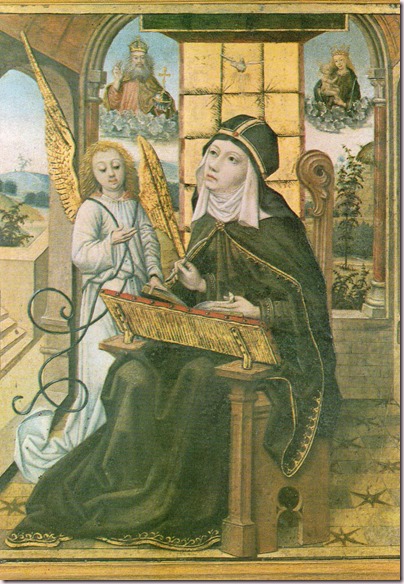 “Birgitta of Sweden (Saint Bridget), Birgitta Birgersdotter, was born in 1303 in Finsta, Uppland. She grew up in a high-born family. Her father was a lawgiver and the family had close links to the church and the royal family. At the age of 13 she married the knight, lawgiver and councillor Ulf Gudmarsson. Their manor was Ulvåsa in Östergötland. The couple had eight children.

After her husband’s death, when Birgitta was in her 40s, she received divine revelations, which grew to more than 600 over time. Birgitta’s task was to repair a decayed church in the name of God. She did not hesitate to reprove priests, the pope or sovereigns. War and plague ravaged Europe – but this did not prevent Birgitta from setting off to Rome in order to gain the pope’s approval of the convent order she was assigned to establish in one of her revelations.

Birgitta died in Rome in 1373. She never got to see her convent. Birgitta’s remnants were transported in procession across Europe to Vadstena in 1374. The convent in Vadstena was inaugurated in 1384.” 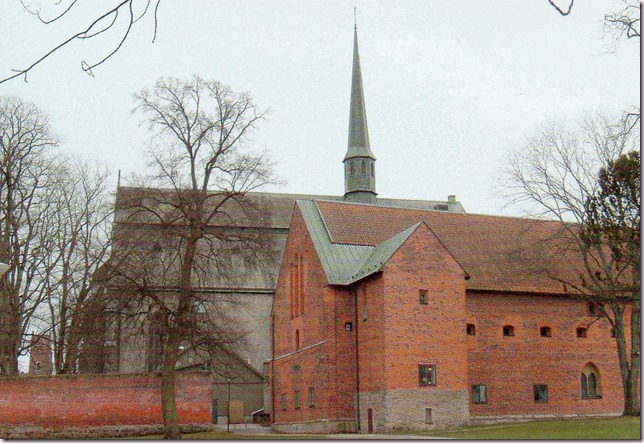 The abbey church and the north wing of the medeival convent. (POSTCARD)

“The convent museum is situated in one of the most interesting buildings in Sweden. It was built as a royal palace in the 13th century. This was the first profane brick building in Sweden. In the 14th century, the palace was transformed into a convent according to the instructions given to St Birgitta of Sweden in her revelations. During the last years of the 16th century, the convent was closed and the buildings were used as a veteran’s home, a prison and a mental hospital. The exciting past of the house was discovered during surveys in connection with renovations in the 1950s and 60s.” 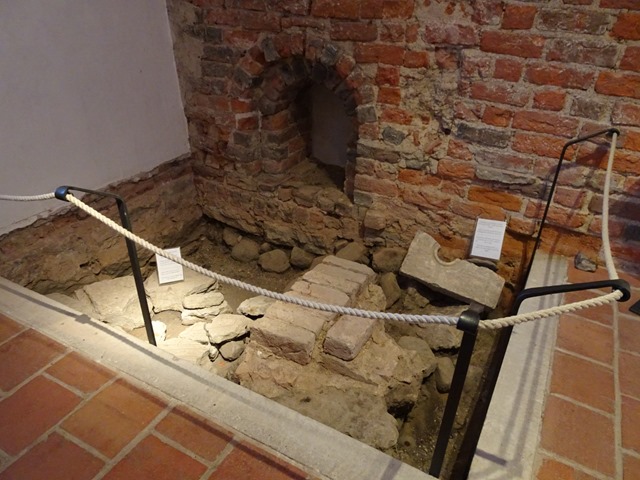 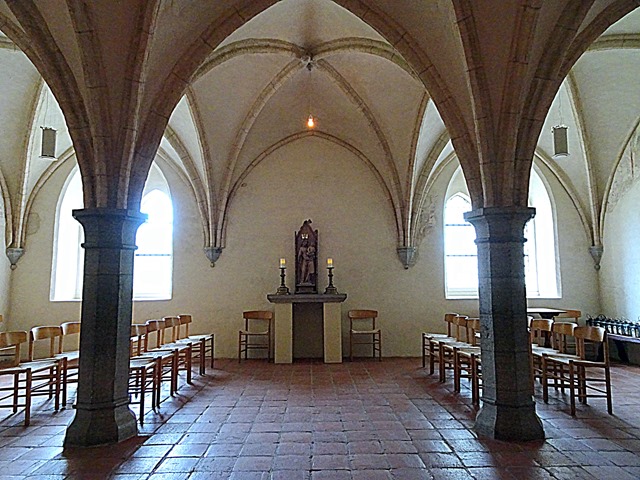 The Chapter Room
This room on the ground floor, with fantastic acoustics and (remnants of) 14th century murals, is believed to have been the Chapter Hall of the convent. 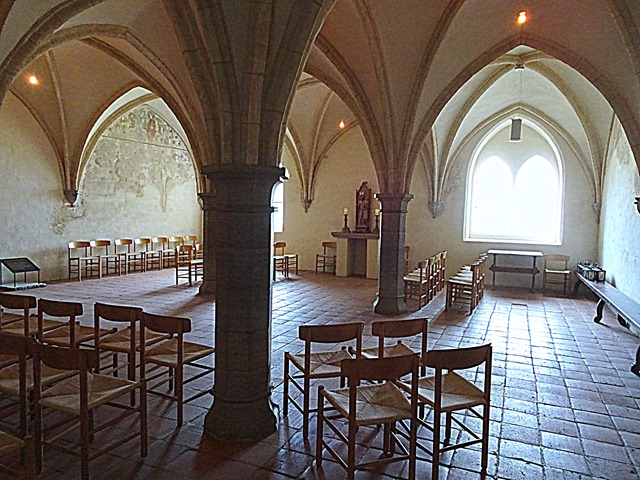 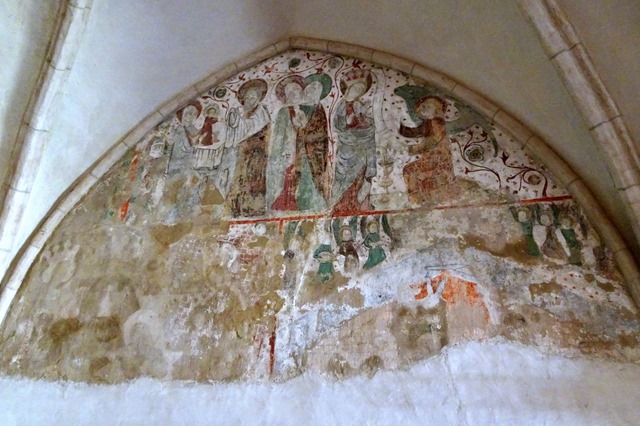 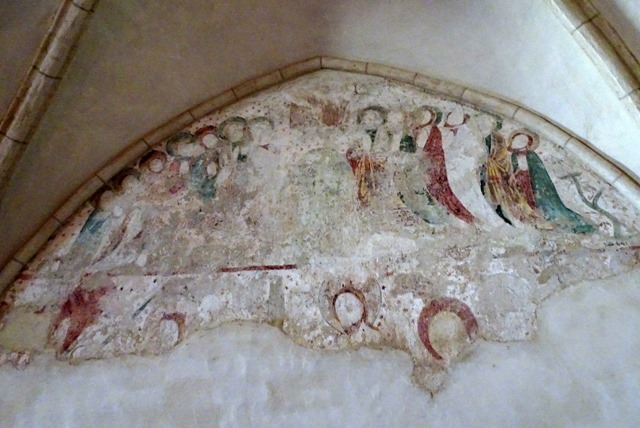 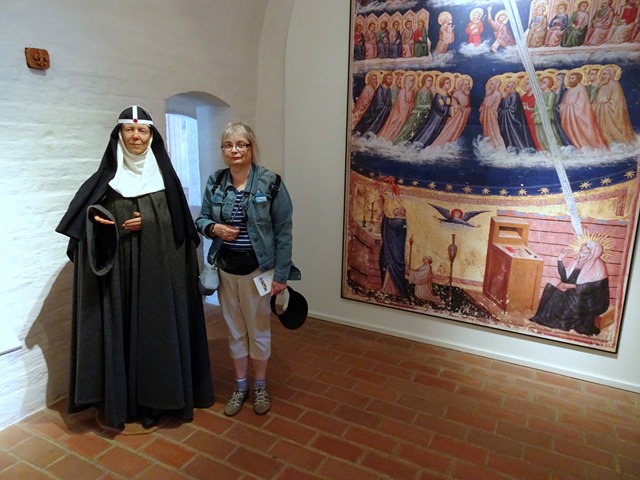 The Dormitory
Upstairs, at the entrance to the nuns’ sleeping quarters, we were welcomed by this Bridgettine nun (a very lifelike wax doll). 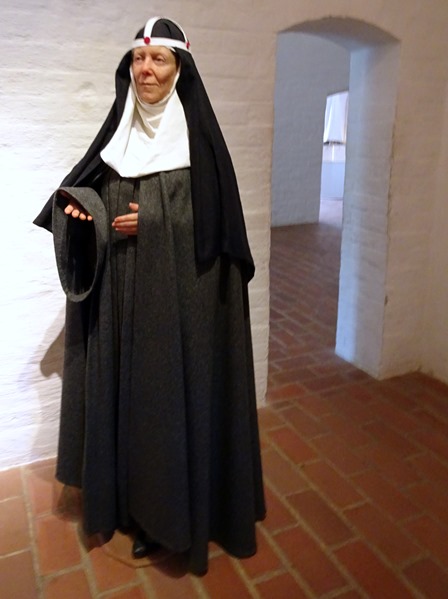 “I am Katarina, Birgitta’s daughter, and the first abbess of the convent. I followed my mother on many long travels, and took her earthly remnants back from Rome to Vadstena. I fought to have her sanctified, and made her vision of this convent come true.” 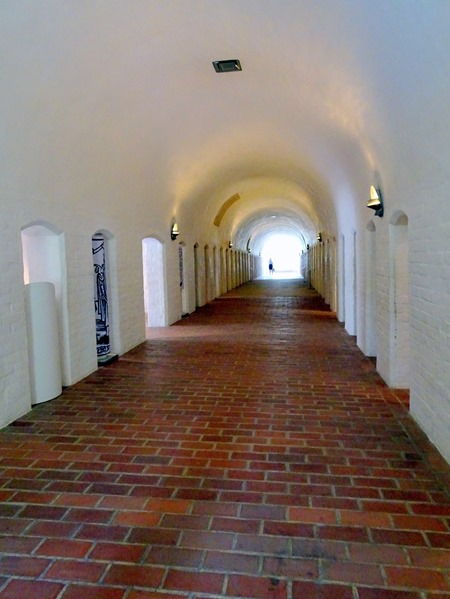 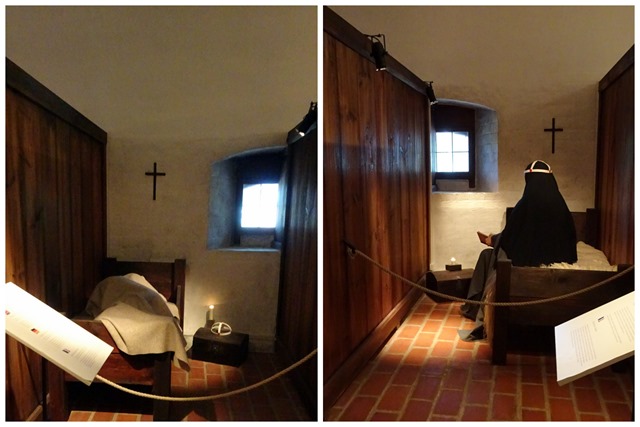 Sleeping cells
“A bed, a chest and a shared loop hole – a nun’s private space.” 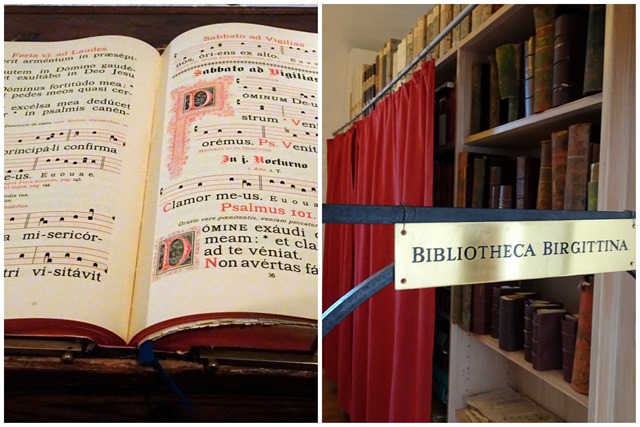 “One distinctive feature of the pre-Reformation houses of the Order was that they were double monasteries, with both men and women forming a joint community, though with separate cloisters. They were to live in poor convents and to give all surplus income to the poor. However, they were allowed to have as many books as they pleased.” (Quote from Wikipedia) 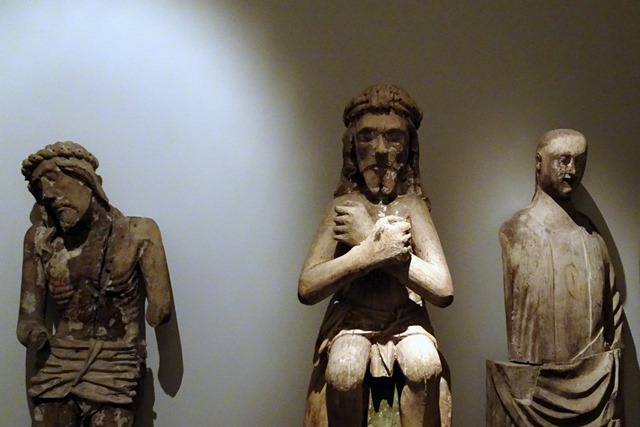 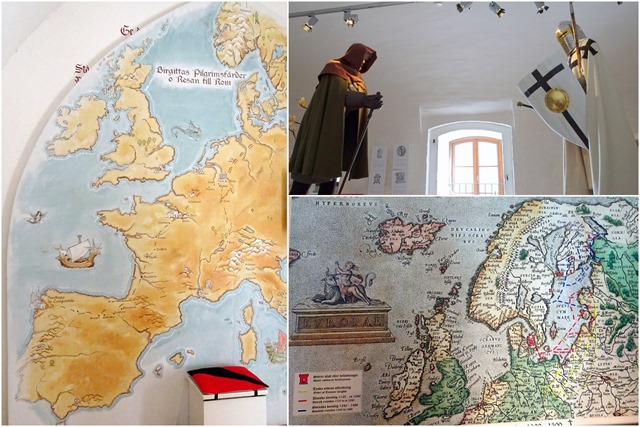 Pilgrims and Crusaders
“Pilgrimages and crusades are two sides of the same coin. Vadstena was an important pilgrimage site and Birgitta was a zealous advocate of crusades.”
(Just quoting the brochure! – which also adds “Learn more about these two medeival phenomena”… From for example the old maps on display in that room.) 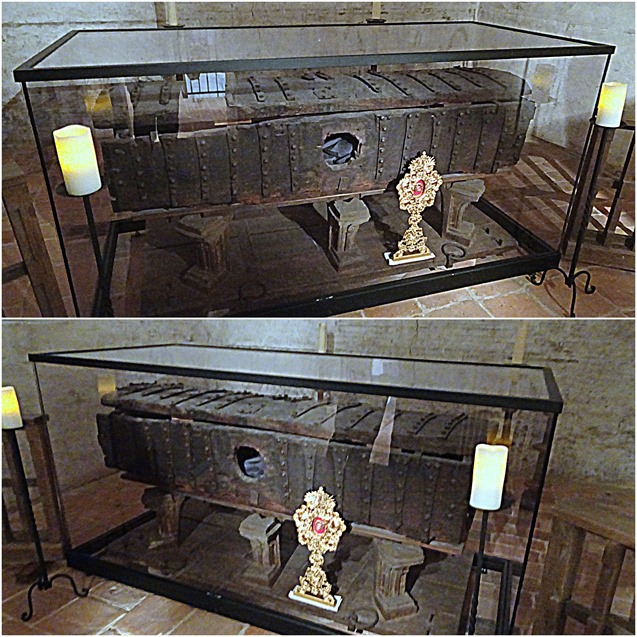 The Prayer Chamber
”Birgitta’s presence is palpable here. See the chest in which Birgitta of Sweden’s remnants were transported from Rome to Vadstena in 1374.”

Most of the text in this post is copied or translated from museum brochures, or signs near the objects in the museum.

Please note: Only the first two images are postcards; the rest are all my own photos.

Postcards for the weekend 49: “Retro or Vintage”

Posted by DawnTreader at 18:14