The first stop on our trip was at Jönköpings Läns Museum.

On of their permanent exhibitions is about the illustrator John Bauer (1882-1918), best known for his fairy tale illustrations. 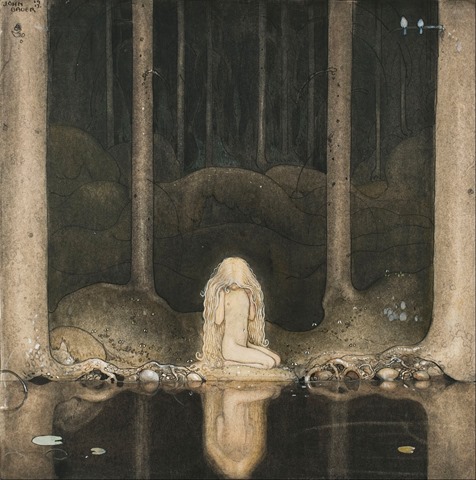 "Still, Tuvstarr sits and gazes down into the water"
Watercolor, 1913 (Image from Wikimedia Commons)

Perhaps the most famous of all Bauer's illustrations (?)

Some facts about Bauer picked from the Wikipedia article:

John Albert Bauer (4 June 1882 – 20 November 1918) was a Swedish painter and illustrator. His work is concerned with landscape and mythology, but he also composed portraits. He is best known for his illustrations of early editions of Bland tomtar och troll (Among Gnomes and Trolls), an anthology of Swedish folklore and fairy tales.

Bauer was born and raised in Jönköping. At 16 he moved to Stockholm to study at the Royal Swedish Academy of Arts. There he met the artist Ester Ellqvist, whom he married in 1906.

Ester and her son, 'Putte'

Bauer traveled throughout Lappland, Germany and Italy early in his career, and these cultures deeply informed his work. He painted and illustrated in a romantic nationalistic style, in part influenced by the Italian Renaissance and Sami cultures. Most of his works are watercolors or prints in monochrome or muted colours; he also produced oil paintings and frescos. His illustrations and paintings broadened the understanding and appreciation of Swedish folklore, fairy tales and landscape.

In 1918, at age 36, Bauer was tragically drowned in a shipwreck on Lake Vättern together with his wife and their two-year-old son, and all the rest of the people on board. It was a recent train accident that had made Bauer book their journey to Stockholm by boat across Lake Vättern, on the steamer Per Brahe, rather than by train. The weather was bad, and besides passengers, the boat was carrying a lot of cargo, some of which was stored unsecured on deck, making the ship top-heavy. By the time the steamer was at sea a full storm was raging; the wind caused the cargo on deck to shift and some of it fell overboard, further destabilizing the ship. The ship capsized and went down, killing all 24 people on board, including the Bauers. The ship was salvaged on 12 August 1922, and the Bauers were buried in a cemetery in Jönköping a week later.

The SS Per Brahe in Stockholm after the salvage

Below are some of my own photos from the museum:

Most of Bauer's originals for About Gnomes and Trolls are square pictures about 20 to 25 centimetres (7.9 to 9.8 inches). 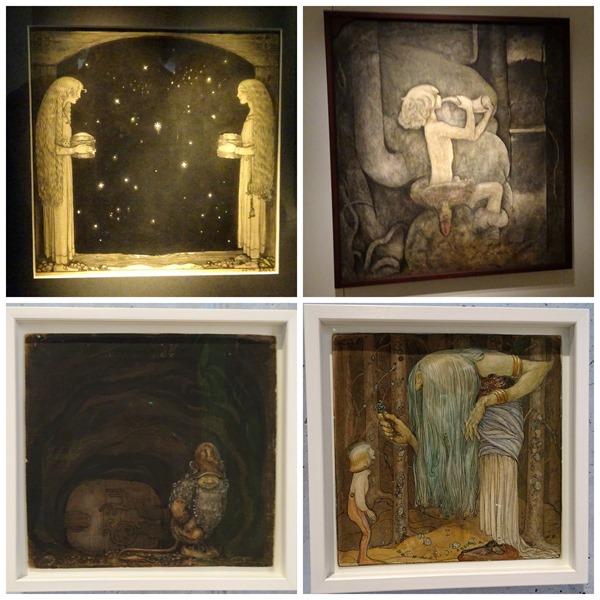 He also made some bigger paintings, though... 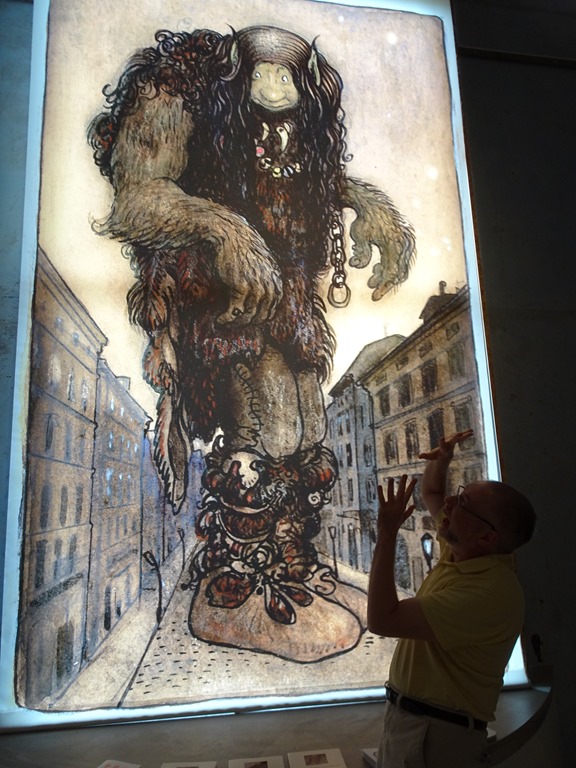 One of my brother's jobs on this trip of ours (besides driver and luggage-carrier) was to stand next to things to give you an idea of  the size of them...

Posted by DawnTreader at 18:34