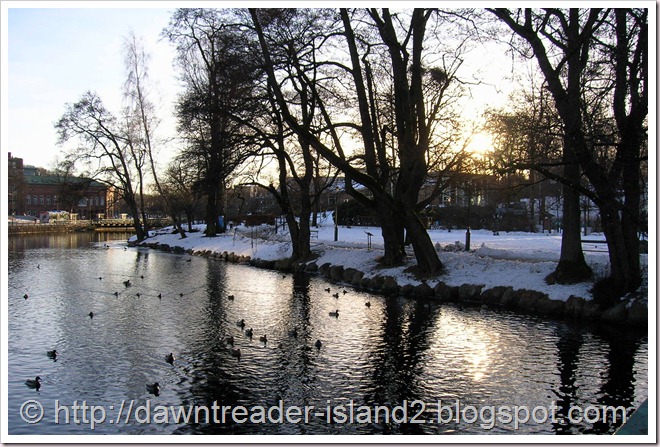 3 years ago, on 5th January, 2009, I created my first blog, The Island of the Voices (the forerunner of this one) and wrote my very first blog post: The Dawn of a New Year and a New Blog.

As blogging became a great boost for my photography interest, later the same year I also started DawnTreader’s Picture Book.

1 year ago, somewhat mysteriously having reached the limits of my free web album*, I started over in a new account and changed the name of my main blog to Beyond the Lone Islands; no longer feeling as lonely and invisible as when I first set sail to venture out into the Unknown. (As most of my regular readers know, my blog titles as well as my signature refer to The Voyage of the Dawn Treader by C.S. Lewis – one of the seven Chronicles of Narnia.)

All-in-all, it’s been an exciting journey, making new friends far across the oceans, and learning a lot along the way!

Somehow (don’t ask why) I find myself with three spare photo calendars for 2012. So I’ve decided to do a giveaway (or three!) to celebrate my 3rd Blogoversary.

It’s a wall calendar size 20x30 cm, with one photo for each month. All photos by me. The calendar follows Swedish standard for holidays and name-days. The names of the months and days of the week etc. are in Swedish.

If you want a chance of winning one of the three calendars, just leave a comment on this post some time from now and one week forward (the last day = Thursday 12th January; Central European Time). Only one comment per person will be counted for the lottery.

Some time during the weekend after I will write down the names on separate pieces of paper, put them in a bowl or something, and draw three winners. I’ll let the winners know by email or blog comment, and of course also in a post here.

*About the Picasa web album, I seem to have managed to make better use of my allotted space with the new account. Now in one year I’ve only used 8% (which includes my Picture Book blog as well).

The photo in this post is from last winter
and is my January picture in the photo calendar.

Posted by DawnTreader at 00:01