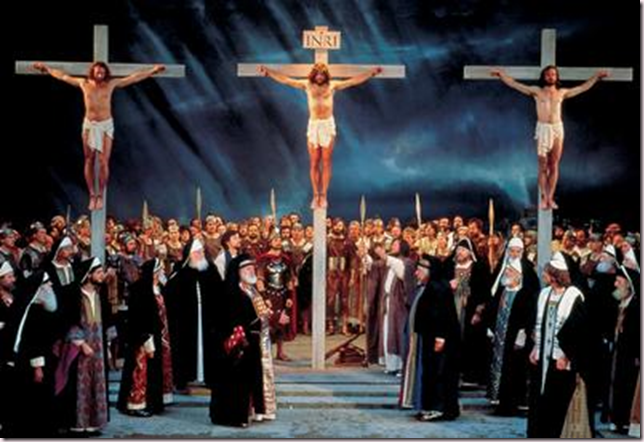 In June 1990 (21 years ago! – how time flies…) I had the privilege of going on a trip to Austria to see the Oberammergau Passion Play. This is a musical Easter drama which has been performed in the little village of Oberammergau every ten years since the 1630’s, to fulfill a vow made by the villagers when a plague was ravaging the area. (Follow the link to see, hear, read more.)

The play, now performed repeatedly over the course of five months in the first year of each decade, involves over 2,000 performers, musicians, and stage technicians, all residents of the village. The play runs through a whole day, with a break for a meal.

There is a reason why, among all the things I could say about it, I mention the break for a meal. Because that’s when I saw Jesus ride a bicycle. At lunch break, going home for a meal, before getting on with his job of saving the world. 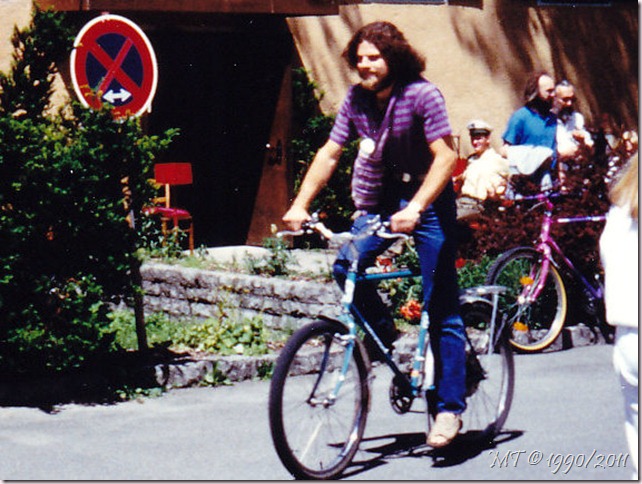 Even if I had not been lucky enough to catch it with my camera, I’m pretty sure that image would have stuck with me through the years. Because that’s just so like him.

14 When the hour came, Jesus and his apostles reclined at the table. 15 And he said to them, “I have eagerly desired to eat this Passover with you before I suffer. 16 For I tell you, I will not eat it again until it finds fulfillment in the kingdom of God.”

17 After taking the cup, he gave thanks and said, “Take this and divide it among you. 18 For I tell you I will not drink again from the fruit of the vine until the kingdom of God comes.”

19 And he took bread, gave thanks and broke it, and gave it to them, saying, “This is my body given for you; do this in remembrance of me.”

20 In the same way, after the supper he took the cup, saying, “This cup is the new covenant in my blood, which is poured out for you. 21 But the hand of him who is going to betray me is with mine on the table.

Posted by DawnTreader at 21:32