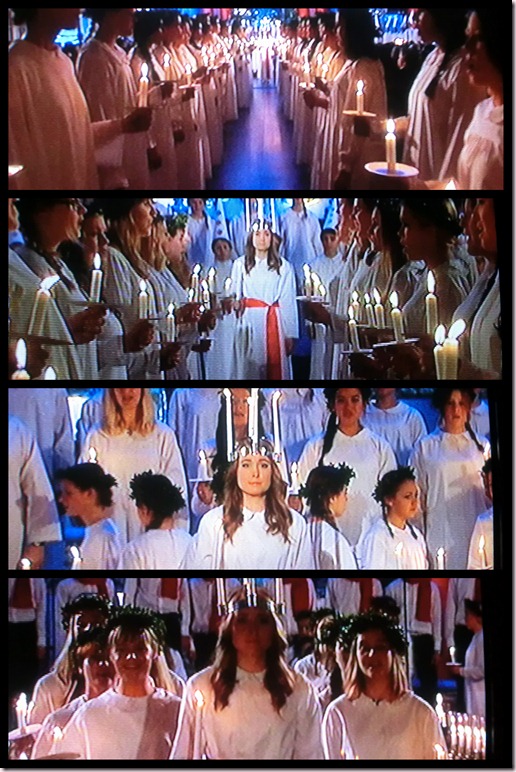 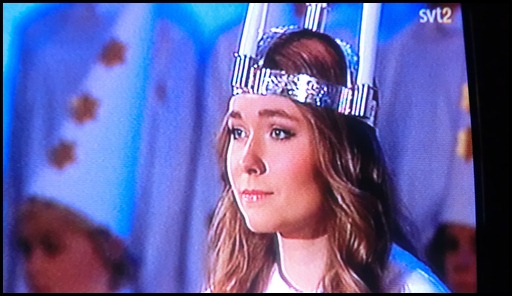 Like a vision of light, St Lucy – Lucia – appears on our doorstep in the early morning of 13th December; once upon a time believed to be the darkest night of the year. Lucia represents the victory of light over darkness.

Wearing a white gown with a red sash and a crown of candles on her head, she walks at the head of a procession of women, each holding a candle. The candles symbolize the fire that refused to take St. Lucia's life when she was sentenced to be burned. The women sing a Lucia song while entering the room, to the melody of the traditional Neapolitan song Santa Lucia; --- the various Scandinavian lyrics are fashioned for the occasion, describing the light with which Lucia overcomes the darkness. Each Scandinavian country has lyrics in their native tongues. After finishing this song, the procession sings Christmas carols or more songs about Lucia.

Our modern day visits from St Lucia have their roots in various traditions of the past. The veneration of  St Lucia here in Scandinavia may have been introduced as a counterweight to the superstitious fear of a vicious “Lussi” creature supposed to haunt this night of the year in old times.

It was particularly dangerous to be out during Lussi Night. Children who had done mischief had to take special care, since Lussi could come down through the chimney and take them away --- The tradition to stay awake through the night to guard oneself and the household against evil, has found a modern form through throwing parties until daybreak.

The modern tradition with public Lucia elections and processions in the cities started in Stockholm in 1927 and spread from there. Today most cities in Sweden appoint their own Lucia. Voting is often part of the election process. Lucia and her maidens will visit shopping malls, old people's homes and churches etc during December; often also collecting money for charity.

The pictures in this post are from Swedish television this morning (photographed by me from the TV screen).

Posted by DawnTreader at 17:11